Cam Newton Signs with New England: How Does this Effect the Jets and Bills? 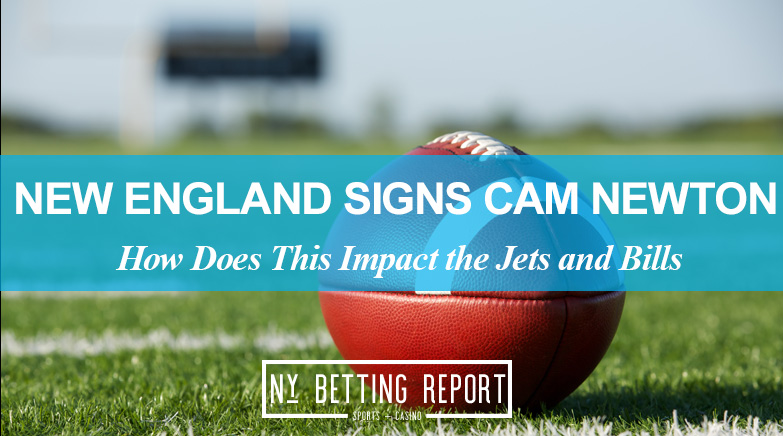 On Sunday, the New England Patriots signed quarterback Cam Newton to a one-year deal. The Patriots locked up a former MVP quarterback to replace New England legend, Tom Brady. Right now, Newton will most likely be the starting quarterback heading into training camp.

With Newton singing with New England, it completely changes the NFL landscape. The Patriots dynasty moved on from Brady this offseason and planned to start Jarrett Stidham. Now, they bring in a guy that won an MVP and played in a Super Bowl.

Also, odds in the AFC East change as the Patriots now become the favorite to win the division, after the Bills were slight favorites when the odds opened.

The Impact of the signing

New England is always a threat to win the AFC as long as Belichick is around. Now, Newton completely changes the odds in the NFL. The Patriots went from +2300 to +1700, according to FanDuel. Also, New England has the third-best odds to win the AFC behind the Chiefs and Ravens.

New England has already dominated the AFC East since the turn of the century. Now, bringing in a superstar quarterback like Newton will most likely continue their run. The Patriots win total went from 9 to 9.5 wins and are +100 to win the AFC East.

However, they still have issues on the offensive line, which doesn’t go well with a quarterback who has been injury-prone the last few seasons. Also, New England struggled to stop the run in 2019, and Newton won’t be helping on defense this season. There are still holes that need to be filled on the roster, but having a legit quarterback helps the Patriots, especially when he’s paired up with a coach like Belichick.

The public will flock to New England’s future, which could inflate them more than they should be. There could be some value on the Bills to win the AFC East if the public drives the odds too high.

How do the Jets and Bills seasons play out?

The rest of the AFC East woke up this morning wondering how the Patriots continue to bring in talented players. The Patriots have won 17 of the last 20 AFC East titles, and no other team has come close to competing with them.

Since Belichick joined New England in 2000, the Bills are 5-35 against the Patriots and the Jets 11-31 with a playoff win in 2010. Both New York teams have struggled to compete since the turn of the century. Now, with New England signing Cam Newton on a one-year deal, both Buffalo and New York might have to take a backseat for another season. Buffalo was +130 to win the AFC East before the Newton signing. Now, they are +160, and the Jets sit at +700.

Buffalo was most likely going to compete for the division this season with New England. The Bills have built a solid roster around quarterback Josh Allen, and they had one of the best defenses in the NFL in 2019. If the Patriots would have gone with Stidham at quarterback, then there was a chance the Bills could have taken the division.

Buffalo sits at 8.5 wins, which was one-half win less than New England before the Newton signing. Now, the Patriots sit at 9.5 wins, giving them a whole game over Buffalo. The Jets still sit at 6.5 wins.

The dynamic in the division changes, but there is still a chance for Buffalo to knock off New England. Last year, the Patriots struggled to protect Brady, which isn’t going to help Newton, who has dealt with injuries in the last few years. Also, New England struggled on run defense last season, which cost them in the Wild Card Round.

If the Patriots can’t address the holes on their roster from last season, then there is no sign that New England will walk away with the division title. Yes, the Newton signing is an upgrade, but it won’t have as big of an impact if he’s running around in the pocket this season.

Overall, this is still the Patriots division to lose, but the Bills aren’t too far behind this season. If New England isn’t careful, then Buffalo could win their first division title since 1993.