Could The Jets Pivot To Justin Fields? DraftKings Odds Show There’s A Chance 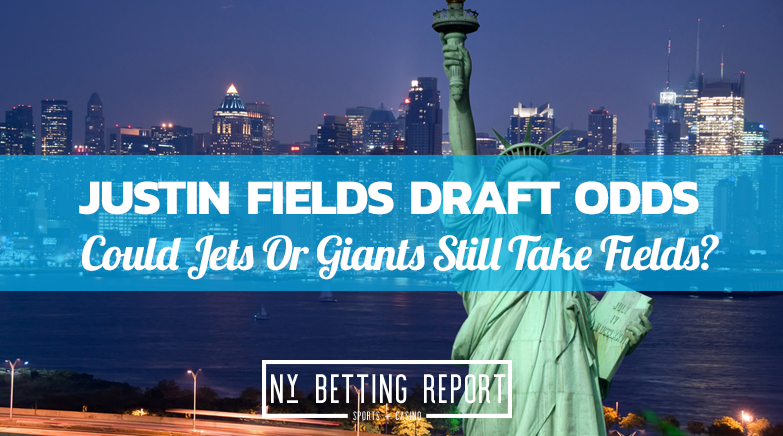 DraftKings Sportsbook has NFL Draft specials up currently, and with the New York Jets picking second we can turn to the odds to see an idea of what the Jets could do. Now we know the position they will address, and that is a quarterback. The real question is going to be is it Zach Wilson or Justin Fields. Odds have slightly moved up for Fields and of course, there is always a chance the Jets make a trade, but that has become far more tricky with the news about Deshaun Watson.

The Jets have the second overall pick and if this was to stay put, DraftKings has the second overall pick odds at Zach Wilson for -200. Justin Fields is +350. These draft odds are pretty centralized on the Jets taking Wilson. There has been some news out of the Jets camp that this is going to be the route they go. Is that actually true? We actually don’t know of course, and this could be a smokescreen or maybe this is just simply all noise and they do view Fields as the second-best quarterback.

Many viewed Fields as the second-best option behind Trevor Lawrence, but at the end of the college season and beginning of the NFL offseason that seemed to change. It is a bit odd given Fields has held this spot for most of his college career and since we started building this class up. There haven’t been any inside leaks other than they really like Wilson, but that doesn’t disregard that they also like Fields.

DraftKings recently has posted a list of teams to draft Justin Fields. Currently, the Falcons lead the way at +250, the 49ers are +450 and then the Jets are +500 with Carolina sitting with the same odds. Atlanta is sitting with the 4th overall pick, who do need to address a need for a future quarterback. Matt Ryan is older and has a few years left on his contract.

The 49ers are listed as an option because of their need for a quarterback even though they are not being vocal about that need. I like the trade-up option for Fields for the 49ers, which would really push them up the odds even if Fields isn’t quite ready to make an instant impact. With Brandon Aiyuk and Deebo Samuel as wide receivers and George Kittle, these would be excellent weapons to step into.

Carolina has been very vocal about landing a quarterback. Fields could fall to them but it seems like they would need to trade up. Now New York wouldn’t need to trade up and trading back with anyone doesn’t make any sense. They are +500 to take him, which is still a value and a possibility. I like his value here because we truly don’t know who the Jets will take and +500 for the Jets here is better if you are looking at them taking him compared to saying Fields is +350 to be the second overall pick.