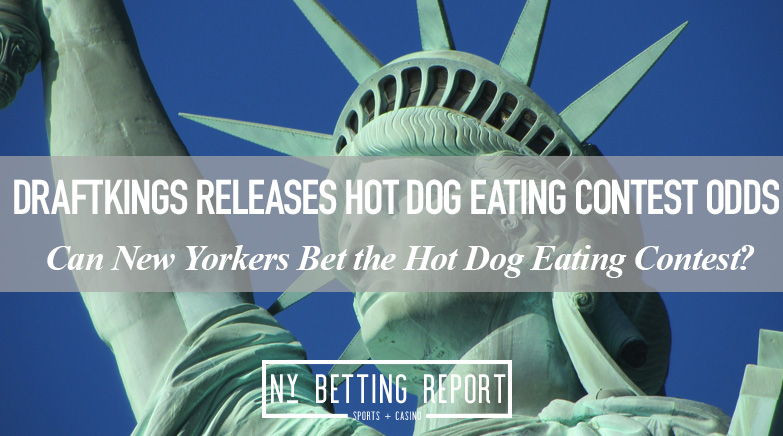 However, New York bettors are left in the dark, despite the event taking place in their state. Since mobile betting isn’t available in their state, they aren’t able to bet on the competition.

The hot dog eating contest usually takes place at Coney Island at Surf and Stillwell Avenue. However, this year’s competition is being held in an undisclosed location and will have strict social distancing measures.

For the first time, bettors can place legal wagers on the Hot Dog Eating Contest. However, there are only five available bets. The first two bets are either betting the favorite in the men’s and women’s competition vs. the field.

Joey Chestnut is -1000 to win vs. the field, which is set at +550 odds. Miki Sudo is -850 to win the women’s vs. the field at +500. Also, DraftKings bettors can place wagers on the over/under on how many hot dogs the favorite will eat with Chestnut having an alternative line.

This year, social distancing rules are limiting the number of contestants, which gives the advantage to Chestnut. In 2015, Chestnut lost to Matt Stonie, who will not be able to participate due to travel restrictions New York has put in. Also, Major League Eating brought Chestnut in a week early, so he should be more comfortable during the competition.

With a lesser talent pool and the circumstances, this could throw off Chestnut mentally, and come in well below the 72.5 total. He’s hit the number once in the last 13 years, but he should stay below Saturday.

How Can New Yorkers Bet the Contest?

If anyone from New York wants to be the competition, then they’ll have to travel to New Jersey to do so and use the DraftKings app. The bettors from the Empire State are used to this as New York has yet to allow mobile betting. Also, all four New York sportsbooks are in upstate New York, which makes it easier for New Yorkers to cross into New Jersey.

In 2019, bettors from New York wagered $837 million in New Jersey. New York loses millions in revenue every year because of a lack of mobile betting. Now, bettors will travel to New Jersey again if they want to bet on the competition. As long as they have the DraftKings app, then they’ll be good to go.

DraftKings could draw some added customers from the competition. This comes at a good time as the NBA, NHL, and MLB plan to restart their season at the end of July. If bettors are itching to get bets in on Nathan’s Hot Dog Eating Contest, then they could come back for the three major sports set to return.

Also, the NFL and College Football is right around the corner. DraftKings could be setting themselves up for success this summer and fall with odds on the contest.