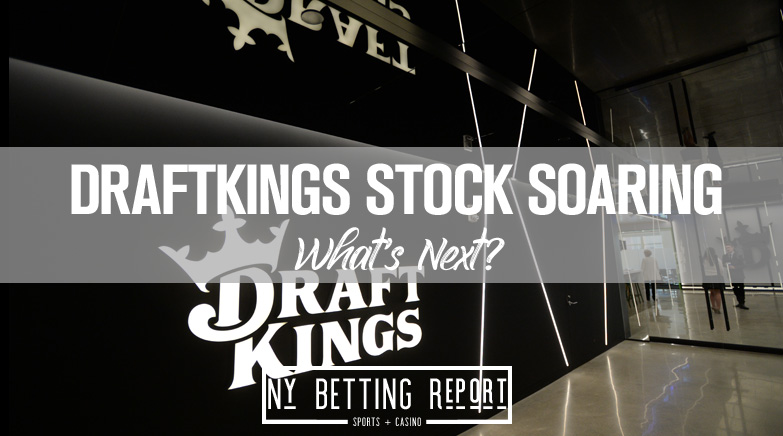 Even with very few sports going on these days, the stock of daily fantasy sports and sportsbook outfit DraftKings is on the rise in a big way. Calling itself a digital sports entertainment and gaming company when it went public on the Nasdaq Stock Exchange in April, DraftKings has exploded over the past two months despite currently existing in a world that’s largely lacking sports.

The mere anticipation of sports returning has led many investors to believe that a sportsbook like DraftKings is a safe bet, with some projecting the online sports gambling industry to reach heights of up to $19 billion in the next three to five years.

When DraftKings went public in April, the company planned on selling 33 million shares. Only 14 million of those were new shares, while the rest went to current stockholders, including big names like Patriots owner Robert Kraft and Cowboys owner Jerry Jones.

However, DraftKings ended up increasing its stock offering, and when the sale closed earlier this week, 46 million shares had been purchased. Of that 46 million, only 16 million went to new shareholders, while current shareholders went above and beyond expectations, reaching 30 million shares.

The bet that DraftKings investors are making is that fans will be so tired from living in a world without sports that they will immediately overcompensate once sports return, leading to a massive boost in DraftKings’ revenue. Last month’s “The Match” charity golf tournament provided a great example of the potential DraftKings holds when sports return.

Gamblers didn’t just bet on the outcome of the match but made wagers on every hole. Prop bets and in-game betting has remained an overlooked part of the industry, but one that is fit to grow in a world of online sportsbooks and fans having easy access on their mobile devices.

In addition to “The Match,” NASCAR racing and soccer in several European leagues have returned to action. The NBA, NHL, and MLB are all making plans to hold games in some form or another while the NFL is moving ahead with plans for a normal season in the fall.

With most states, including ones like New York and California that have a massive population, starting to open up again, the economy should begin to bounce back, giving sports bettors the economic freedom to make wagers. After all, it could be a while until they’re able to spend their money on tickets to see games in person.

Another reason why DraftKings stock is soaring these days is the expectation that sports gambling will be part of what brings the economy back during the pandemic recovery. Since the Supreme Court opened the door for states to make their own decisions about sports betting, only three states have failed to at least introduce a bill legalizing some form of it.

Amidst the pandemic, more states are starting to consider sports betting, as it will help boost the economy and bring in more tax revenue. Maryland, for example, will have voters decide on legal sports gambling in November.

However, one big obstacle that remains in New York is Governor Andrew Cuomo, who remains opposed to legalizing mobile sports betting in the Empire State. State lawmakers have made a hard push for mobile betting, but Cuomo is holding firm against it.

Nevertheless, seven states allow mobile betting, with many more keeping the possibility open for the future, which is why DraftKings stock has exploded and why investors are feeling confident.