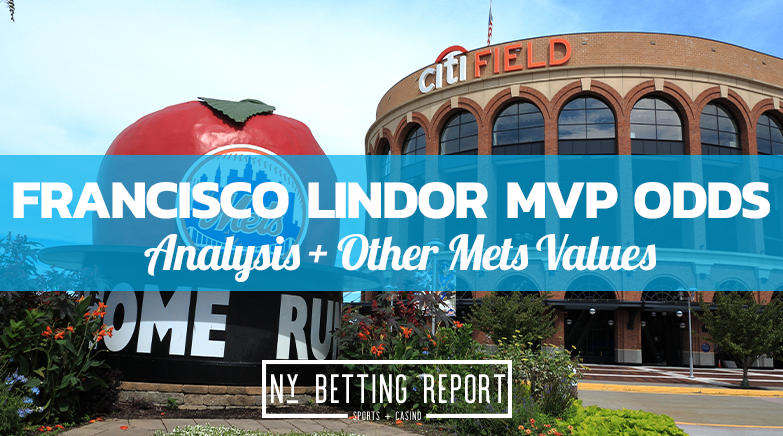 Baseball is around the corner, and Mets fans have a lot to be excited about. The Mets are favorites to make a deep run into the postseason and are loaded with exciting talent. Newcomer, Francisco Lindor, is one of the top-ten players listed in odds for the National League MVP award. He is +1200 around other NL East names like Freddie Freeman and Bryce Harper. While Ronald Acuna, Juan Soto, and Mookie Betts are the frontrunners at the moment, Lindor brings in some solid value. There are also a few other Mets set within the odds.

Mookie Betts has been a tough name to beat in the MVP race no matter what league he is in. The Dodgers have two MVP candidates listed within the top four odds, and then two rivals are also in the mix with Ronald Acuna and Juan Soto. In a short year last season, Freddie Freeman won the award, and the prior two winners were Cody Bellinger and Christian Yelich. Lindor has a chance to post strong numbers, especially with a combination of speed and power.

Lindor has to surpass 30+ home runs and 20 stolen bases to be in the running at a minimum. Ultimately if he can creep closer to a 40/30 season, he would be in a far better spot. This continues to be where most MVPs will land, and of course, bring a healthy OBP. There is a tough task to overcome these names, especially Fernando Tatis, who has been really a face of baseball of late. He also has that mix of power and speed. San Diego is also making a real threat to win a World Series.

Rest of The Mets

There are a few other notable names from the Mets on DraftKings odds for NL MVP. The next in line is Pete Alonso at +3300. Given he won’t bring any stolen bases to the table, Alonso could mash 50+ home runs and be a prolific cleanup bat. However, he needs to see a jump in average to help round out more categories for the voters. Alonso’s power needs to be on full display, which we know he can do after mashing 53 home runs in his rookie season.

Michael Conforto isn’t too far behind at +4000. He falls in the line of other names like Max Muncy and Joc Pederson. Conforto has flashed a lot of potential and had a very good 2020. He would really have to make a major jump in about every department to be considered. If he can build off a short 2020 where he had a .412 OBP, his odds should improve.

Jeff McNeil has long-shot odds at +5000. We generally don’t see these types of players win MVP awards, given the power and speed really isn’t a threat compared to the names mentioned above. McNeil is a great on-base guy and did club 23 home runs in 2019. The NL is just loaded with so much talent that McNeil won’t be able to touch most in the SB+HR department, which has a heavy trend in MVP voting.