Giants Running Back Saquon Barkley Out for Season 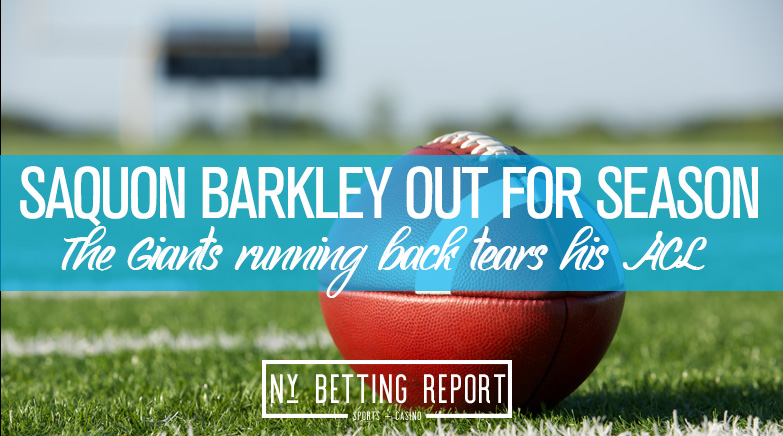 On Sunday, New York Giants running back Saquon Barkley went down awkwardly in the first half between the Giants and Chicago Bears. Barkley needed help getting off the field as he could not put any pressure on his right leg.

After leaving the for the rest of the game, Barkley went back for evaluation where speculation was a knee injury to end his season. On Monday, the announcement came that he tore his ACL and will miss the remainder of 2020.

According to team sources, Barkley will undergo surgery soon. He also deleted every picture on his Instagram Monday morning except for a picture of NBA legend Kobe Bryant. The decision could show a tribute to having a mamba mentality while about to go through rehab.

Barkley will finish the season with 34 rushing yards on 19 attempts.

Sunday was a brutal day across the league with injuries. 49ers lost multiple players, including Nick Bosa, for the season. Carolina Panthers, Christian McCaffery, is expected to miss a few weeks with an ankle injury. Indianapolis Colts safety Malik Hooker is also out for the year with an Achilles tear.

This list continues from Tyrod Taylor, Drew Lock, Courtland Sutton, Solomon Thomas, and many more. No one wants to see injuries happen in the NFL, and it is even more depressing when multiple star players across the league go down in one week.

One can only ask, “How does this happen?”

Well, one possibility is the how offseason went for the NFL. With the coronavirus limiting offseason and preseason schedules, players and teams might not have been as prepared for a full 16 game season compared to recent years.

Major injuries happen every year in the NFL, but Week 2 was particularly worse. Surprisingly, this was the week that saw more guys suffering major injuries than in Week 1. Maybe the first week guys were just fresh enough where the early wear and tear came a week later.

The only hope moving forward is we do not see a lot less significant injuries moving forward. Maybe Week 2 was a fluke and something completely out of the norm, which would be right on par with 2020.

The offseason schedules could have impacted player’s bodies, but this could one of those wonky weeks where an insane amount of injuries swept across the league.

Barkley’s Impact on the Giants

Saquon Barkley made a burst onto the scene in 2018 as a rookie, having over 2,000 yards from the line of scrimmage. His sophomore season was not as flashing, although he did have over 1,000 rushing yards last season, even after missing three games. 2020 will be much different for the third-year running back with being sidelined with his ACL injury.

Barkley is the Giants best offensive weapon. He rushed for over 1,000 yards in his first two seasons, and can also be a threat in the receiving game as he has over 1,200 career receiving yards.

The Giants have not found success running the football in their first two weeks. Granted, they did face the Steelers and Bears, who have two of the best front sevens in football. Regardless, losing Barkley will be huge, and trying to find a replacement in their system will not be easy even as they cannot get anything going on the ground.

New York is 0-2 to start the season, and it does not get any easier next week as they host San Francisco on Sunday.