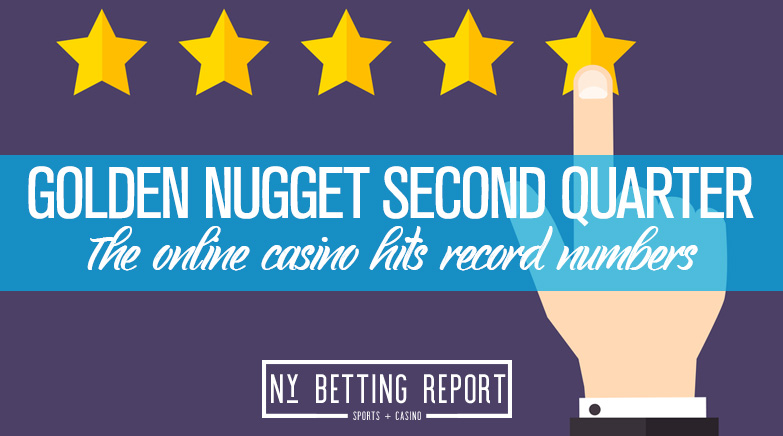 The Golden Nugget Online Gaming had a huge second-quarter report record highs despite a pandemic.

“We are pleased with the continued strong revenue growth in New Jersey and our ongoing profitability,” said Tilman J. Fertitta, GNOG’s owner.

In June of this year, the GNOG made a transaction with Landcadia Holding II, Inc. which would have a special purpose acquisition. This would allow Gold Nugget to became an indirect owner of Landcadia, which will change its name to Golde Nugget.

The record theme is carrying over to the third quarter. Golden Nugget in Atlantic City reopened on July 2 after closing for over 100 days due to COVID-19.

While some customers returned to the casino in person, the online casino has been hitting record numbers and seeing continued growth. They reported $31.4 million in online revenue which is a new all-time high and over a 100 percent increase from last year.

BetAmerica, Betfair Casino, and PlaySugarHouse also operate under the Golden Nugget license, accounting for a portion of the Revenue. New Jersey online gaming reported $87.4 million for July, which is a record for the state. Experts are now trying to figure out how long this will last, or is there a chance that online gambling is the future.

Casino floors are only operating at 25 percent capacity and there is not to be drinking, smoking, or eating during this time. Yup, you can only get a high from gambling at the casinos. Sad! Indoor dining is taking time, so casinos are being creative right now.

New Jersey allowing online casinos have been a lifesaver for Atlantic City. Even at 25 percent capacity, online casinos will still see a big chunk of the revenue, and Atlantic City will be able to survive off of that. Online gaming revenue hit all-time highs due to the closings of the casinos.

Golden Nugget is on the verge of becoming a public company on the NASDAQ, and will soon be in the spotlight of the U.S. stock market.

This June, Golden Nuggetpartnered with Landcadia Holdings, that will trade under Golden Nugget, agreed to a deal that is supposed to close in the third quarter. Golden Nugget is also looking to launch in Pennsylvania and Michigan in the ner future.

Thomas Winter, senior vice president, and general manager of Golden Nugget, commented on the recent performance as well as the future.

“Our second-quarter beat our target, supported by record players activity and Average Revenue per User (ARPU). Our online play has remained strong in July and into August, and we are confident that we will exceed our revenue and operating income forecast in New Jersey this year.”

Pennsylvania and Michigan is still a process in the making. They are working on getting the license processed to enter and Golden Nugget Online Gaming is “monitoring legislative momentum in other states,” said Winter. The ultimate goal is to expand the Golden Nugget’s US online gaming business “wherever regulations provide for profitable growth opportunities.”