How to Bet Bills vs. Chiefs with Mahomes Injury Uncertainty 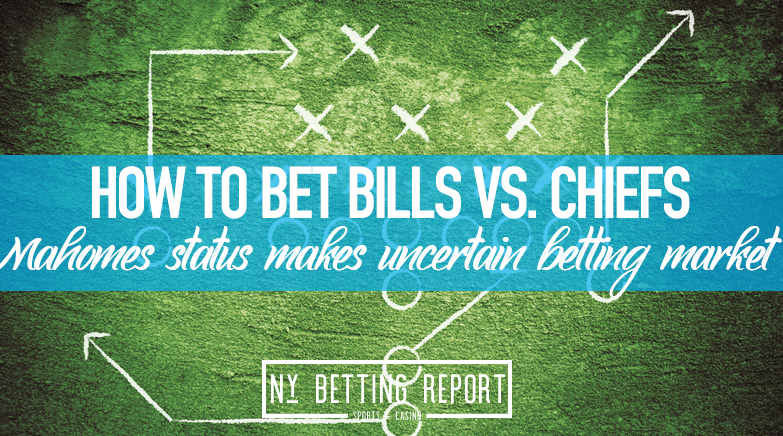 The Buffalo Bills are heading to Kansas City this week to take on the Chiefs for a chance to play in Super Bowl LV. This is the first time since 1994 that the Bills are playing for a chance at going to the Super Bowl.

There is still a lot of uncertainty heading into Sunday’s game thanks to the injury status of Patrick Mahomes. Last Sunday, Mahomes had to leave in the third quarter against the Browns after suffering a potential concussion. Mahomes did not return after stumbling from a vicious tackle where he was stumbling when trying to get to his feet.

On Monday, the Chiefs announced that Mahomes suffered a pinched nerve during the game and was also going through concussion protocol heading into this week.

Oddsmakers still wasted no time by posting odds on the AFC Championship game. The Bills opened as 2.5-point underdogs before money came in on the Chiefs, pushing Buffalo to +3. People across the industry have noted that the championship game’s current line is soft and will be moving depending on Mahomes’ status.

If he plays, then the line will move in favor of Kansas City, and if he doesn’t, then Buffalo will become the favorite to play in Super Bowl LV.

How to Bet AFC Championship Game

Right now, betting the Bills and Chiefs championship game would be more about speculating than handicapping, if that’s what you are into. There are four different scenarios about how the line moves depending on Mahomes’ status for Sunday, and there is the best time to bet all four scenarios.

Scenario 1: Bet Chiefs & Mahomes Plays
If you like the Chiefs in this game and think Mahomes will clear concussion protocol, you will want to get the Chiefs at -3. If Mahomes is cleared, DraftKings oddsmakers Johnny Avello had stated that Kansas City could jump to as high as -6 before Sunday’s game if he cleared and able to play. Bet the Chiefs as soon as possible if you like Mahomes to play and KC to advance to the Super Bowl.

Scenario 2: Bet Bills & Mahomes Plays
If you like the Bills at +3 and still think Mahomes will play on Sunday, then you are going to want to wait as long as possible before jumping on Buffalo. You will be on the opposite end of scenario one and wait to see if you can get Buffalo at +6 if Mahomes plays. Kansas City has been letting teams hang around over the last six weeks, and Buffalo can certainly do that on Sunday.

Scenario 3: Bet Bills & Mahomes is Out
If you think Mahomes doesn’t clear concussion protocol, you will want to get Buffalo +3 right now and take the money line. Most likely, the Bills will swing to -3 and possibly jump all the way up as high as -7 before Sunday. Obviously, Mahomes and Chiefs are going to everything possible for him to play this week, but there is a chance he is still out despite practicing this week. On the off chance, this happens, there is going to be a lot of value at getting Buffalo as an underdog with no Mahomes.

Scenario 4: Bet Chiefs & Mahomes is Out
Ok, here me out on this before you completely write it off. In this house, we bet numbers and not teams. There will be a huge swing in the market if Mahomes is out, and depending on how high the number gets on Sunday, there could be value on the Chiefs. Kansas City is at -3, but Buffalo could get as high as -7 by kickoff Sunday. That is a 10-point swing in the line, which is simply too much. This creates value on the Chiefs, and the Andy Reid offense will be able to hang around this weekend even without Mahomes as the betting public takes the Bills.