Is there Value Betting on the Jets or Giants this Season? 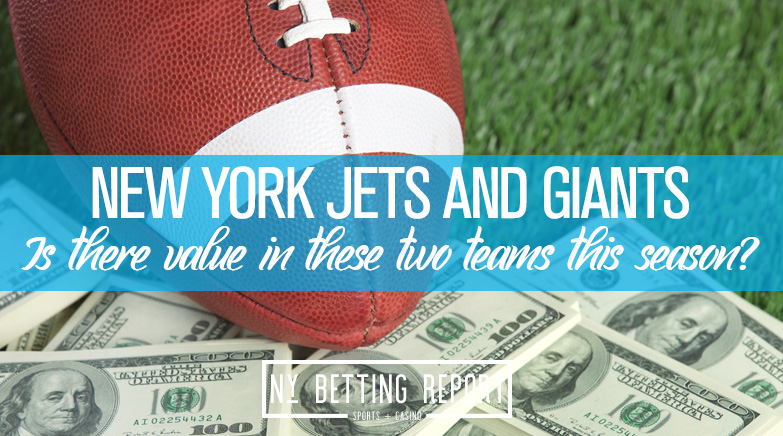 The Jets and Giants come in towards the bottom of their respective divisions this season. Both teams look to rebound into contenders over the next few years but are still a few pieces away from doing so.

Although a Super Bowl run from either side feels unlikely, there are many different ways to bet on a future or two throughout this season. Both New York football clubs have questions at quarterback on whether the ones leading the franchise now will be able to do so down the road.

There is even the possibility that these two teams take steps back from last season, which will get New York fans worked up and wondering why they put on their teams’ uniform. Whether you will be satisfied with the 2020 NFL season or not, it is here to stay, so let’s take a look at the Giants and Jets season bets.

Starting with the Jets, the offensive side of the ball should be slightly improved this season. With Le’Veon Bell in the backfield, he should have room to move in the interior with upgraded center Connor McGovern coming in this offseason.

Darnold should also be healthy heading into the season and have two top-40 receivers, according to PFF.com, to throw too in Jamison Crowder and Breshard Perriman.

On the other side of the ball, the Jets defense should be able to hold its own in 2020. Steve McClendon will be the Jets’ best interior defensive lineman this season and can solidify the trenches for this team.

The biggest question will be the secondary. After losing safety Jamal Adams this offseason, they will have to find a way to replace him. Marcus Maye and Blessuan Austin should be able to lock down one side of the field. The other side, however, remains a mystery.

As for the Giants, if they have a healthy Saquon Barkley, then this offense could be decent. Daniel Jones still needs to take the next step, but with Barkley in the backfield and Golden Tate and Sterling Shepard on the outside, Jones will have some weapons this season. Let’s hope the offensive line holds up in 2020.

Defensively, the Giants have a lot of work to do. Only one player on the defense ranks in the top-30 in their position on PFF.com, which is not a good sign for 2020. The D-line should be fine but will be handled if they face a solid offense.

Julian Love at safety might be the Giants only hope at safety even with having Jabril Peppers on the other side. This is most likely where this team is going to lose games. As long as Jones is not a complete bust this season, then the Giants can score points at times. However, the defense will cost them wins.

Although I like the Jets to fall below there, I do not want to bet it at -150. The 6.5 wins for the Jets feels a bit steep for a team that overachieved last season. Even with a few games, they can take away on the schedule; seven wins feel just a bit out of reach for the green and silver this season.

The Giants have made some improvements this offseason on both sides of the ball. However, they have a gauntlet of a schedule this season, which makes it tough them seeing anything close to .500 football.

Six wins feel about right, but I would not be surprised if this team falls below the six wins. They have three games that are winnable between the Redskins twice and the Bengals. Outside of that, their next potential wins could come from the Bears, Cardinals, or Browns.

However, those do not feel like guaranteed wins by any stretch, and unless things spiral for either of those teams, the Giants will dog in all three games. Under six wins feels good, as of writing this.

For them to even hit their win total, they will most likely have to pull off a few upsets to get close to .500 on the season.