Jalen Hurts to Start for the Eagles this Sunday 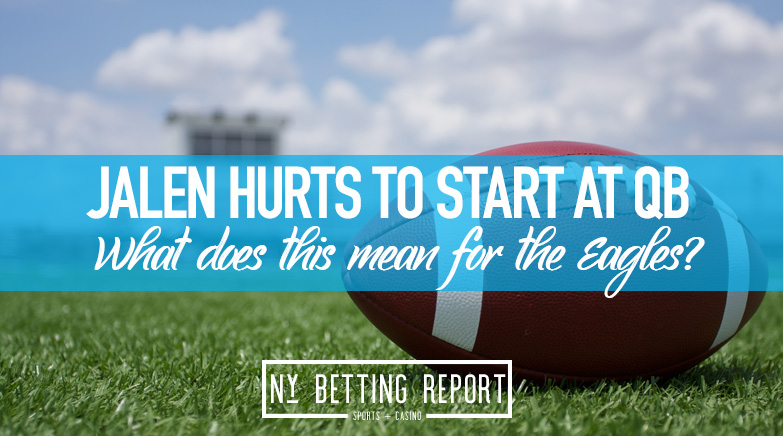 Jalen Hurts entered Sunday’s game against the Green Bay Packers after the starting quarterback went down with an injury. Wentz was unable to return, so Philadelphia turned to the rookie quarterback to attempt a late-game rally.

Although it wasn’t enough to secure a come from behind win, Hurts did enough to earn the starting spot this Sunday against the New Orleans Saints. With a full week of prep, this could allow Hurts to take over as the starting quarterback full-time for the remainder of 2020.

It’s also time the Eagles turn to a different guy under center. This year, Wentz has thrown 15 interceptions and fumbled the ball 10 times. He also has one of the worst QBRs in the NFL at 49.2. Now, the Wentz is benched. It is also the biggest cap hit the Eagles will have with a non-starter this week.

This offseason, Wentz signed a four-year $128 million contract that doesn’t even kick in until after the season is over, and now he has been benched for Hurts.

In hindsight, the deal has been terrible for Philadelphia, but when the starting quarterback currently has the team at a 3-8-1 record, it’s time to make a change. Since winning the Super Bowl in the 2017-18 season, the Eagles have been banged up with injuries. The talk has always been around waiting until this team got back to health, and now that everyone is healthy, Wentz is still the problem with this team.

At this point in the season, it won’t hurt to start Hurts regardless. The team is out of the playoff picture and the NFC East divisional hunt, so you might also figure out what you have with the rookie quarterback you drafted this year.

Hurts might not even be an upgrade from Wentz, but it will be good to know that he can’t play much worse than how Wentz has played in 2020.

Hurts completed five passes on 12 attempts for just over 100 yards on Sunday. He also threw one touchdown and one interception in the process. The sample size is obviously small with the rookie QB, so it’s hard to say that there will be value on Philadelphia this Sunday.

The Eagles are +7 at home against the Saints, which could be enough value to back Philadelphia. However, the Packers’ defense is not as good as New Orleans, and Hurts didn’t have the best half of football.

Coming in on short notice with no prep also changes things. Sunday could be different, but Hurts could play more of a game management role as he goes up against one of the best defenses in the NFL.

It remains to be seen if it will be enough to keep the game close, but Hurts is athletic enough to use his feet if need be. He does have more rush attempts than pass attempts on the season and did run five times for 29 yards against the Packers.

This is a wrinkle that the Eagles will use this week with Hurts as he makes his first career start.