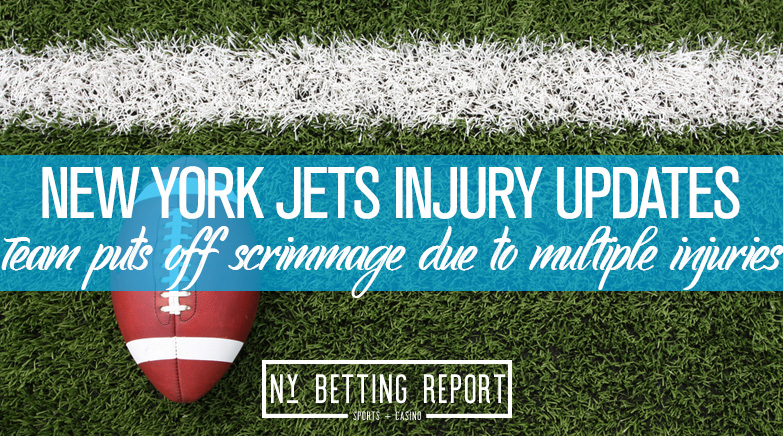 The New York Jets open up their 2020 training camp in the most Jets way possible.

Jets practice report: They held a walk-through instead of a regular practice. Because of the number of injuries at WR and TE, Adam Gase felt the team needed "recovery" time. They had only seven WRs available. They're in pads the next two days and he… https://t.co/hqWkSj6T5q

Yes, too many injuries from the wide receiver and tight end position prevented the team from getting in a full practice. Head coach Adam Gase feels like the team needs “recovery” time before they get into full swing.

The injuries early on are concerning, but the team does hope to have almost everyone back for the start of the NFL season. Right now, the team looks to get in more individualized drills. The biggest factor of the 2020 preseason is no games.

The Jets plan on scrimmaging at some point, but it will be pushed back due to injuries, according to Gase. The Jets are +8000 to win the Super Bowl, according to DraftKings Sportsbook.

The wide receivers are seen most on the Jets preseason injury report. Vyncint Smith does have the most severe injury of the bunch having core muscle surgery, and potentially missing two months of the season. Smith has been in New York for two seasons and played in 13 of the Jets games in 2019.

Rookie receiver Denzel Mims is still recovering from a hamstring injury. There is no timetable on his return. However, the team is taking precautions on their 2020 second-round pick. Braxton Berrios was excused for personal reasons and will return to the team before camp is over.

On the defensive side, rookie defensive end Jabari Zuniga is out with a quad injury and has no timetable for a return, as of writing this. Cornerbacks Brian Poole and Bryce Hall will miss time in training camp. Poole is cited for missing due to dehydration and should be back before the week is out. Poole started 10 games for the green and silver.

Bryce Hall remains on the COVID-19 list. Hall is also recovering from a college ankle injury and is unlikely to return to the team anytime soon. Having to miss time because of COVID is not ideal, and an ankle injury needing rehab sets Hall back even more. The team hopes to see him on the field at some point this season.

Injury Impact on the Odds

The Jets are +8000 to win this season’s Super Bowl, according to DraftKings Sportsbook, and this many injuries to the roster never help. Although the Jets are most likely going to miss the Super Bowl, the injuries do not affect their odds that much.

However, New York’s win total could affect depending on how long some players are out. The Jets are in dire need of weapons for quarterback Sam Darnold. They went out and drafted Denzel Mims in the second-round this season, but he is currently missing time due to a hamstring injury.

With Mims in his rookie season, this will slow down in his development, not being able to participate in the camp. He should be a solid receiver in New York, but also needs to get in the reps at the NFL level.

The Jets moved All-Pro safety, Jamal Adams, this offseason as well, which hurts the teams secondary. Now, they have Brian Poole and Bryce Hall missing time in training camp. With an already depleted secondary, missing a key role player and a rookie is not going to do them well in the early weeks of the season.

The Jets cannot even scrimmage with the injuries they are dealing with. If this team cannot even get solid reps in the preseason, then they are going to have to figure things out in regular-season games, which should make for an interesting 2020.