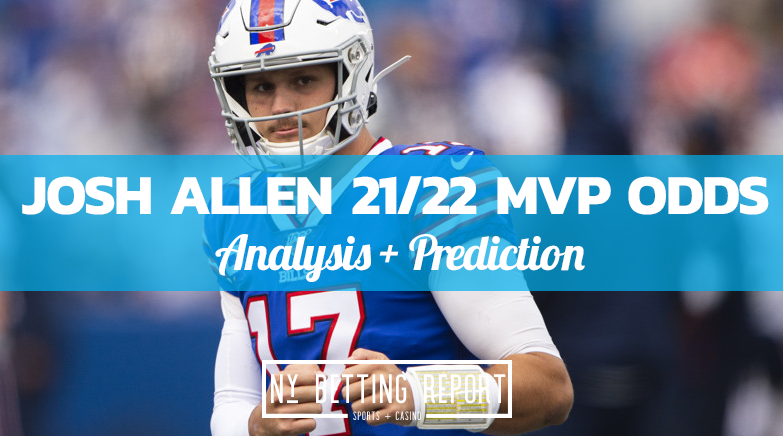 Josh Allen is coming off a terrific season where he threw 4,544 yards, 37 touchdowns, and completed 69% of his passes. He also has 421 rushing yards and eight touchdowns on the ground. The Bills reached the AFC Championship game and went 13-3 in the regular season. That could have been 14-2 if it wasn’t for the Hail Mary loss in Arizona. The AFC East has undergone a shift in power as the New England Patriots are not looking like a team ready to bounce back to winning ways, and Miami has transitioned into a tough team. The Jets might turn the corner if they can hit on their draft picks and in free agency. However, the Bills remain favorites for the division so let’s see how Josh Allen stacks up again in the MVP odds.

DraftKings Sportsbook currently has Josh Allen with the third-best MVP odds of anyone in the league, behind Aaron Rodgers and Patrick Mahomes. Rodgers is coming off an MVP-like season where Mahomes coasted through most of the season, and I wonder if that will be different from a Super Bowl loss. We often see MVP voting fatigue where prior winners don’t have as much pull in the year or two after. Of course, that would be different if Mahomes and Rodgers had 45+ touchdowns and 13+wins again. Allen sits at +1300, just ahead of Russell Wilson, Dak Prescott, and Deshaun Watson. It is no surprise to see all these quarterbacks at the top of the list because it is the most important position.

What Allen Needs To Do For MVP

You have to go back to 2006 to have a non-QB win the MVP, and in 2008 and 2009, a player has won it in back-to-back seasons. The last four winners have been Aaron Rodgers, Lamar Jackson, Patrick Mahomes, and Tom Brady. Could we continue to get a new quarterback in this award? I wouldn’t doubt it. Allen was second in voting last season, but Rodgers was the front runner, as you can see. Allen will face a tough schedule in 2021, facing other AFC teams like the Steelers, Colts, Titans, and Chiefs. All four were in the playoffs last season. The NFC South is also on the schedule, so facing the reigning champions will be as well. Allen is going to need to win 12+ games as a minimum and duplicate last season’s numbers. He has an advantage of being able to produce numbers on the ground. Still, if he can hit the 4,500 mark and produce 40+ passing touchdowns, Allen will have far more votes than last season, especially if Rodgers regresses a bit and the voter fatigue kicks in.

Is There Value On Josh Allen?

If I were making a list of MVP players to wager on before the season, Josh Allen would be at the top of my list. We know Mahomes is the favorite and will have a strong season, but Allen at +1300 will only shrink as we get closer and into the season. There is a lot of uncertainty around other players in this range, and Allen seems to be the safest value.