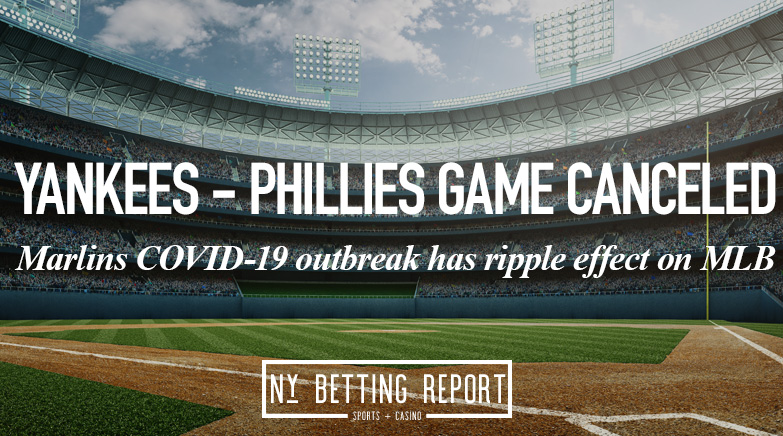 On Monday, Major League Baseball postponed the Miami Marlins home opener against the Baltimore Orioles after 14 members of the Marlins traveling team tested positive for coronavirus. This is the first outbreak among any team in the restart of baseball.

The outbreak comes just three games into the season, which could be a guy punch if the MLB cannot corral the issue. On Sunday, Marlins players decided to play the Philadelphia Phillies, knowing multiple positive tests came in on their staff.

The games this weekend potentially exposed Phillies players, who are now expected the play the Yankees this week. The Yankees would be in the same locker room the Marlins used over the weekend, which could expose even more players if the situation is not appropriately handled.

Shortly after the announcement of the Marlins and Orioles postponement, the Yankees and Phillies postponed their first game against each other.

Can Exposure Cost the MLB its Season?

In short, yes, it can. MLB owners had a conference call with MLB Commissioner Rob Manfred, and canceling the MLB season was not on the table, per source. As of writing this, only Miami Marlins players have tested positive for coronavirus during the season.

This situation is already ugly, and the season is in jeopardy after playing three games. What determines what happens next is if Phillies players are to test positive for coronavirus. If this happens, then there is no telling what will happen to the MLB season.

However, if a majority of players test negative in Philadelphia, then the MLB will have a much easier time working around the situation in Miami compared to having to deal with outbreaks on two teams.

The Marlins planned to cancel both home games against the Orioles, and play the final two games of a four-game home and home series in Baltimore Wednesday and Thursday. The players that tested negative will play in Baltimore while the Marlins will have to pull from their farm system to fill a roster for the remaining part of the series.

As for the Phillies, they will have to take a wait and see approach until they get their coronavirus tests back from the season. These tests are expected to be returned starting Monday evening. Ultimately, the Marlins outbreak could have a ripple effect, depending on how severe the outbreak becomes.

How Does this Affect Yankees Odds?

Right now, the Marlins outbreak does not affect the Yankees much outside of having their game against the Phillies canceled on Monday. However, if the Phillies see an outbreak in their ball club, then there could be problems.

In terms of sports betting, the biggest issue could be the Yankees win total. A majority of sportsbooks need teams to complete 58 of its 60 games this season. If they can do so, then all total tickets will be valid.

Monday’s game will be the first postponement of the Yankees and Phillies season. Now, both New York and Philadelphia can only miss one more game for total tickets to go invalid, unless the teams were to make up the games at a later date.

The canceling of games also could impact win totals if they end up playing 58 games instead of 60. Win totals would not have as much wiggle room if a team were to miss a game or two. The Yankees win total was set to 37.5 wins, according to FanDuel sportsbook. With such a high win total, missing a few games could hurt over backers, especially if they play the required amount of games.

This all depends on what happens with the Phillies’ coronavirus tests. Yankees over backers should hope that the tests come back negative so that the series can resume on Tuesday. However, bigger issues can come out of this if the Phillies suffer their outbreak.