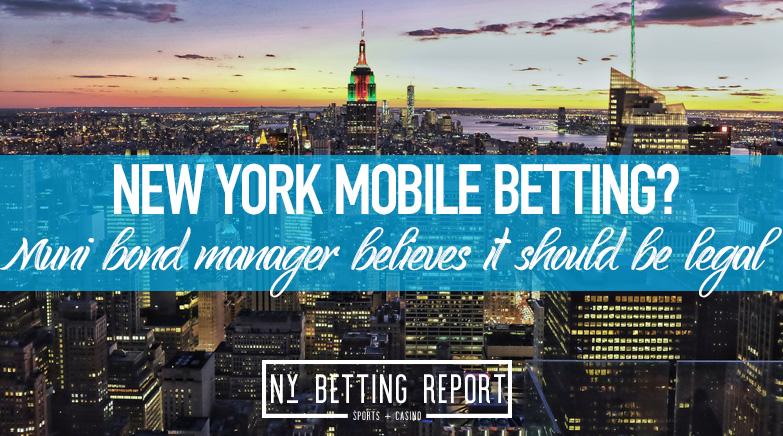 Jim Colby, a VanEck municipal bond portfolio manager, and strategist said that the state is facing severe budget issues. New York is facing a $13.3 billion budget deficit for the fiscal year, which could extend to 2024 due to the coronavirus.

Colby believes that legalizing mobile betting will help generate revenue for the state at a time in which it desperately needs it.

He wrote, “We believe New York showcases an opportunity, seen by many states nationwide, for the adoption and taxation of online sports betting. The appetite for gambling within New York and nationwide is, in our view, strong, but it is not yet fully realized by state and local municipalities.”

New York began taking bets in July of 2019 at retail sportsbooks but has yet to adopt mobile betting.

According to Colby, New Jersey generates $7.24 per capita in sports betting tax revenues compared to $0.05 per capita in New York, with respect to population. He points out that this discrepancy is due to strict sports betting laws that prohibit online betting, bets on in-state college teams, as well as bets on sporting events within the state.

In 2019, Research firm Eilers & Krejcik Gaming (EKG) estimates that New Yorkers wagered $837 million in New Jersey’s generating $6 million in the process. Those numbers are staggering, considering New Yorkers find it easier to travel to New Jersey to place bets instead of driving 90-miles to the nearest New York sportsbook.

Overall, New Jersey makes it easier for New Yorkers to bet there than in the Empire State, which is Colby believes that the state should legalize mobile betting. New York would benefit deeply from the revenue it would generate from the state and would take away from New Jersey, which is generating millions due to New Yorkers coming over to place bets.

New York would see instant benefits from mobile betting if they adopt it. The closest sportsbook to New York City is currently 90-miles away, which makes it easier for people living in the city to cross over into New Jersey to bet.

If mobile betting is legal, then it would keep more people betting in New York than cross over state lines. New York Senator Joseph Addabbo has been a big proponent in mobile betting. Addabbo estimates that the Empire State could make up to $200 million per year if mobile betting became legal.

During a time when the pandemic is putting a multi-billion-dollar hole in the New York budget, mobile betting would help fix that hole. New Jersey also saw about 90 percent of the bets wagered using mobile devices in 2019.

With so many people preferring to bet online than at retail locations, it makes more sense for states to legalize mobile betting over retail. Despite the coronavirus shutting down Atlantic City, New Jersey still sees over $64 million in tax revenue compared to $965k in New York, according to Colby.

There is no doubt mobile betting would instantly help New York in multiple. New York Governor Andrew Cuomo has yet to address mobile betting as a way to help bring money to the state. During this time, Cuomo should begin to consider that as an option. Mobile betting will help fill the budget deficit.