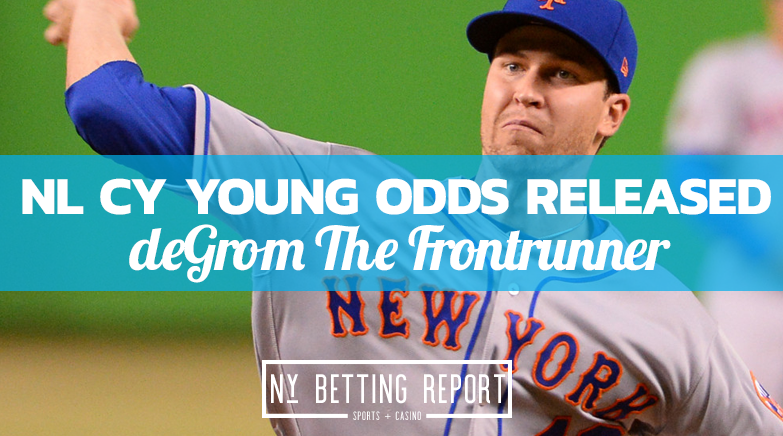 With the MLB season about to be underway, the National League Cy Young odds are beginning to be released on multiple sportsbooks. Jacob deGrom finds himself at a familiar position within the odds, at the top. New York has made some exciting moves over the offseason adding Francisco Lindor and Carlos Carrasco to their team. The Mets are being viewed as a true threat in the National League, despite the Dodgers and Padres being heavily talked about. For the Mets to have a strong season, deGrom will have to put up his usual numbers, and generally, those numbers are always good enough to be in the Cy Young race. deGrom already has two Cy Youngs to his name and will be looking for a third.

DraftKings Sportsbook was one of the earlier releases for the Cy Young awards. deGrom is +500 to win the Cy Young in this upcoming season, and there are a few rivals behind him with the Dodgers arms and Max Scherzer. FoxBet agrees that deGrom is the frontrunner and is offering +475 odds at the opening for him to win the Cy Young. FanDuel, WilliamHill, PointsBet, and BetMGM have yet to offer National League Cy Young odds; however, we should expect them to be in this range.

Jacob deGrom won back-to-back Cy Young awards back in 2018 and 2019. Wins have never been his strong suit, which isn’t looked at heavily, which is a plus. There is more that goes into success than just how good a pitcher is. However, this year he should earn more with a better team around him. deGrom had a 1.70 ERA and a 2.43 ERA within those two seasons and pitched over 200 innings with 250+ strikeouts. Outside of last year, which was a shortened season, deGrom has thrown over 200 innings in each of the last three years prior. The concern with the Dodgers arms is that they are likely going to be careful with all of them and not let them overexert themselves, leading to fewer innings.

deGrom has a great chance to hit that 250+ strikeout mark again and hopefully inch closer to 15+ wins instead of barely reaching ten like most seasons. He has had a sub 2.50 ERA over the last three seasons, and at age 33, I don’t have any concerns for him.

As we get into the season and if deGrom continues to look like the winner, the odds will begin to move away from being any betting value. Injuries are always the major obstacle that can derail an award winner. deGrom has been durable, which is a plus. As mentioned above t is tough to see the Dodgers getting to hit that workload where they put up the numbers of deGrom. Trevor Bauer has that potential, but he is not even close to deGrom in terms of ability. While you could have a name like Aaron Nola or Jack Flaherty go on a run, them edging out, deGrom seems unlikely. Two pitchers in baseball are considered the world’s best currently, and the other is Gerrit Cole.