Nets’ DeAndre Jordan Tests Positive for Coronavirus: How Does this Affect NBA Odds? 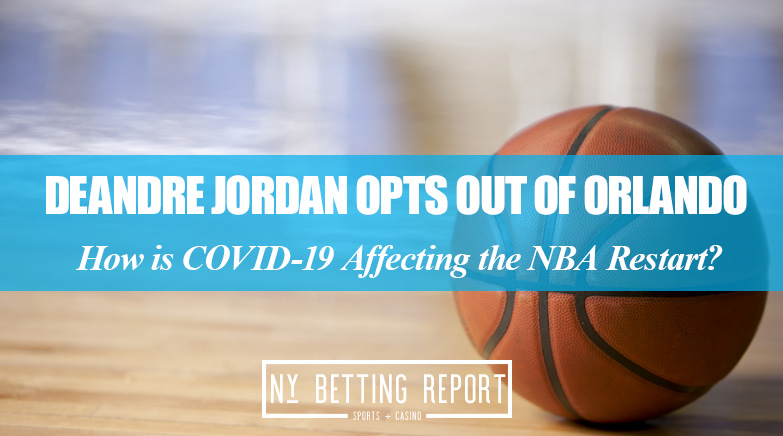 On Monday, Brooklyn Nets Center DeAndre Jordan announced on Twitter that he tested positive for coronavirus, and will not be joining the team in Orlando. The Nets are planning to travel to Orlando on July 7 and will find a replacement player for Jordan.

Jordan is now the fifth player to opt-out of the Orlando restart. Wilson Chandler is sitting out to spend more time with his family. Also, rookie Nicolas Claxton, Kyrie Irving, and Kevin Durant will not participate in Orlando due to injuries.

Spence Dinwiddie also announced that he tested positive for coronavirus, but has not decided if he’ll travel to Orlando or not.

How COVID-19 Affects the Nets Odds

With the DeAndre Jordan news, the Nets remain at +16000 to win the NBA Title, according to FanDuel. However, they are now the favorite to finish as the eighth seed in the Eastern Conference. The Nets head to Orlando with a half-game lead over Orlando for the seventh seed.

The Nets schedule is in their favor. They have three games against non-playoff teams, and two more against the Magic. The remaining three are against the Bucks, Celtics, and Clippers. Even with replacement players, the Nets should have no problems getting into the playoffs.

Also, this year wasn’t the focus as Kevin Durant has been out with a torn Achilles since June of 2019, and Kyrie Irving has only played in 20 games this season for the Nets. With their superstars sitting out, it is evident that Brooklyn is trying to keep everyone healthy and maybe getting younger guys more reps heading into next season.

Coronavirus and the League

NBA teams are submitting rosters for the Orlando restart on Wednesday. The rosters will give sports bettors an idea who is opting in and out of the restart. Right now, the league is still on track to begin July 23, but NBA Commissioner Adam Silver has said that a rise in COVID-19 cases can put a halt to that.

In recent weeks, NBA teams have had to close their practice facilities due to the virus. However, Silver is confident that the Orlando campus will be much safer for the NBA than playing elsewhere. On Tuesday, Florida’s Department of Health reported more than 6,000 additional cases of the coronavirus, raising the state’s total past 152,000 cases. On Saturday, the state had its highest single-day total reported at 9,585 cases.

If Florida can get a handle on the coronavirus, then the league should resume as followed. However, a rise in cases in the south does give the NBA Commissioner a concern for the restart. Right now, six players have made announcements that they will not be participating in Orlando.