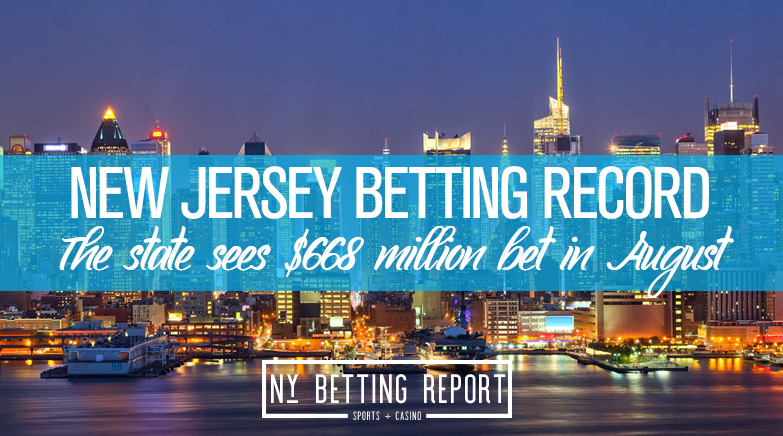 New Jersey breaks a sports betting record in August with a $668 million betting handle in the Garden State. The August betting handle broke the previous record of $614 million that Nevada set in November 2019.

The record-breaking month comes during a time when the NBA, NHL, and MLB all played a full slate a game in August. All three leagues had to shut down in March when COVID-19 broke out across the U.S. and Canada. With a four and a half month hiatus, sports bettors were eager to place action for the first time since spring.

“Recovery is underway, even with continuing travel advisories that decreased visits from out of state,” said James Plousis, chairman of the New Jersey Casino Control Commission. “Atlantic City’s casino win was almost 70 percent of last August’s strong performance, although the months are not reasonably comparable because of restrictions on capacity, amenities, and entertainment.”

New Jersey sports betting had a huge month in August as $668 million was bet throughout the month. The New Jersey Gaming Enforcement saw bettors won $326.3 million for the month. The Garden State surpassed its previous record by over $100 million when the state saw $562 million wagered in November 2019.

The casinos and racetracks that take sports bets saw increases in the last month, and rightfully so. Not to mention, Caesar’s Interactive and Resort’s Digital were bot up over 95 percent for August.

Even though August saw a record month, Ocean Resort and Golden Nugget were the only two casinos to report revenue increases year-over-year. When sportsbooks have barely any sports to bet on for four months, then this is what is going to happen.

However, things should begin to turn over even with casinos that are currently at a loss. Football is underway and will bring in an even bigger handle for the struggling sportsbooks. It is only a matter of time before all of New Jersey is back in the green.

When will the Record Break Again?

There is a good chance that a sports betting state will set a new record in September. If states across the U.S. saw rebounds in August with the NBA, NHL, and MLB in the mix, wait until the September numbers come out with the NFL.

Football is king and is the most bet sport in the U.S. Not to mention, bettors will have a full month of MLB regular season, NBA, and NHL playoffs to bet on as well. Add in college football, and there should be another record broken next month.

With how successful August sports betting was in New Jersey, there is a strong chance that the Garden State could see close to $1 billion in bets for September.

The numbers are astonishing and are only going to go up. What helps is that all four major U.S. sports are playing at the same time. August is usually a lower betting month as the MLB is the only major U.S. sport going on during this time.

The fall is the most popular with football, and March usually does well thanks to March Madness.