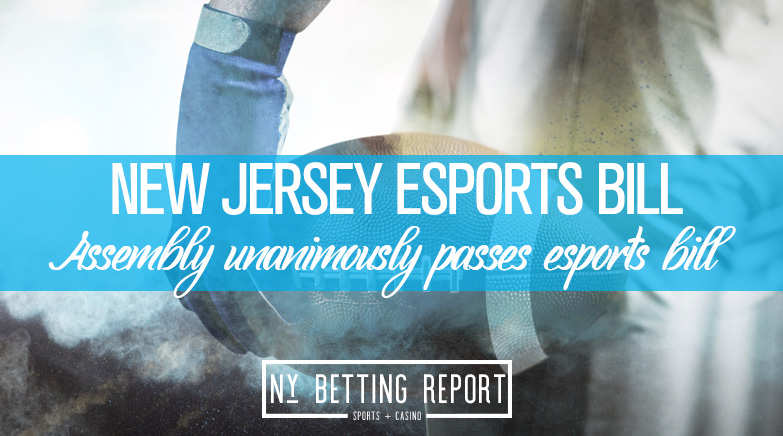 Last week, the New Jersey assembly passed an eSports betting bill to allow gambling on games. The bill passed in 74-0 favor. ESports will now be regulated and offered by New Jersey sportsbooks.

The Division of Gaming Enforcement already has the power to oversee eSporting events. However, Ralph Caputo said that the approval was more on an “emergency basis.”

Earlier this year, esports betting regulations were expanded in Nevada. Thanks to this, players can now bet on the likes of the Call of Duty League and European Championship and Masters for League of Legends.

The ripple effect will move into New Jersey on what will be eSports will be allowed and how they will be regulated.

Getting the Bill Passed

The eSports betting bill has been sponsored by multiple assemblymen and now heading over to the Senate for a final vote. The goal of the eSports bill was to extend sports betting laws into the virtual world.

ESports is becoming a big thing in the U.S. and it is only a matter of time before people start betting on it. New Jersey residents can already bet on a plethora of sports, and now eSports will be added into the mix.

Including electronic sports makes sense in the regular sports betting industry. The market for eSports is young and growing rapidly. Although the following for eSports is teenagers, eventually, they will be of age to place wagers on the events and help sportsbooks bring in another stream of revenue.

The bill was passed unanimously last week, which shows how much support lawmakers have for eSports. The eSports bill still needs to be reviewed and passed in the Senate, but sponsors of the bill appear hopeful.

Adding eSports into the gambling mix, this will allow bookmakers to get excited for eSports betting down the road. States will continue to legalize betting on eSports, especially if Nevada and New Jersey are setting the tone.

The Future of eSports Betting

Although eSports will have a market in the future, there are some critical elements to the law passed by Assembly.

Prohibited sports event includes competitive video games that have affiliation with high schoolers or competitors under the age of 18, or if a minority of participants are below the age of 18.

The language of the law does show concerns for the age of the eSports athletes and the fans following the sport. Sportsbooks could see issues with the event not allowed to be wagered on, or underage kids trying to place bets on the sport.

The DGE allowed wagering on the League of Legends World Championships in November, with a maximum wager of $1,000.

Caputo’s bill allows for bets of up to $100, with a potential winning bet of no more than $500, unless state regulators approve.

The Assembly still needs to find a sponsor for the bill within the Senate. They will want to look for someone that has been passing bills in favor of the casinos. There are key lawmakers; the Assembly will look to get on board with the new bill.

If they can do so, then there is a strong chance Governor Phil Murphy will also back the bill.