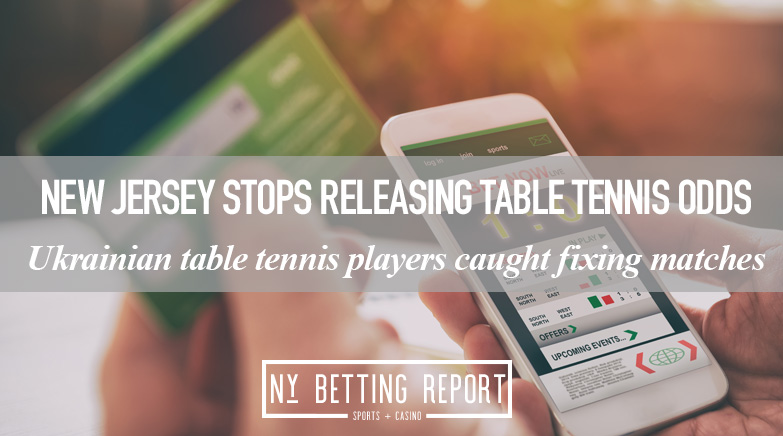 On Thursday, The New Jersey Division of Gaming Enforcement told sportsbooks to suspend all Ukrainian table tennis any matches that involving six players. Concerns arose that those players are fixing matches.

Several issues were found in Ukrainian and Russian table tennis. The problem was that no one knew who was overseeing these matches. Matches not overseen by the International Table Tennis Federation and the European Table Tennis Union, however, provide the biggest concerns over the integrity of the games.

Also, Indiana has suspended table tennis matches that are not regulated by the ITTF or ETTU. Colorado and Nevada continue normally with posting matches. Table tennis was picking up traction during the COVID-19 outbreak as bettors were looking for games to bet on.

When the sports world shut down in March from the coronavirus, bettors were left in the dark on what to gamble on as traditional sports went away. Some turned to Korean baseball or Australian rugby. Others went too Ukrainian and Russian ping pong.

Bettors are always looking for an edge, no matter what sport or league it is. However, some leagues like Ukrainian table tennis make it more challenging to track and understand the regulations behind it.

The six players involved in match-fixing are Liliia Zaitseva, Ivan Gaysin, Karen Dzhanibekyan, Eduard Panichev, Anastasia Efimova, and Gleb Zotov. Bets can’t be placed on matches, including the six players, regardless of where the match is taking place.

Players can still bet on Ukrainian table tennis, but they will not be able to bet on matches involving those six players. Plus, there is a big concern when betting on matches that are not regulated by the ITTF and ETTU for these reasons.

Overall, New Jersey is not taking any chances with these matches. Sportsbooks and casinos have been hurt badly by the COVID-19 outbreak, and they do not need match-fixing to be another issue for their bottom line.

What Else to Bet On?

Sports betting is still somewhat limited in terms of the leagues available. For U.S. bettors, a lot of individual sports have restarted, but team sports are still a few weeks away. However, players have gone overseas for different sports to bet.

Plus, European soccer is returning to multiple countries. Once the epicenter of the coronavirus outbreak, Europe has rebounded and is now seeing soccer played again. Bundesliga in Germany was the first to return. The EPL followed, and so did La Liga in Spain.

In the U.S., the main sports to be on have been the UFC, PGA Tour, and NASCAR. Despite limited action from the usual NBA, NHL, and MLB, players have still found games to place bets on even during the pandemic.

Also, sports bettors in the U.S. do not have much longer to wait. The NBA and MLB are set to return July 23, restarting their seasons. The NHL will follow them as they will return on August 1.

Sports bettors only have a few more weeks until the sports world is somewhat back to normalcy. Players will not have to worry about fixed Ukrainian ping pong matches very soon, and will be able to place the action on the four major U.S. sports. College Football and NFL are still set to return this fall as well.

Sportsbooks do not want to deal with the fallout of fixed table tennis matches as this will soon past for when major U.S. sports return.