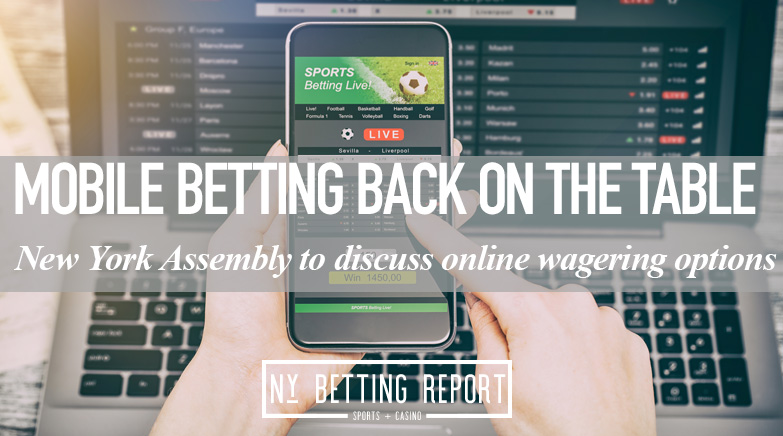 The New York State Assembly has been asking members whether or not they would be in favor of or against mobile sports betting legislation. The survey comes at a time when New York has taken a beating from the coronavirus pandemic.

The state is in search of revenue streams, and now lawmakers are looking at mobile betting as an avenue. Assembly Speaker Carl Heastie and Governor Andrew Cuomo have been against legalizing mobile betting.

Recently, Heastie has become more open to the idea thanks to the pandemic, as Cuomo has still not brought up his recent thoughts on the concept. The polling of lawmakers comes days before the legislature reconvenes on Monday.

New York legalized sports betting in 2013 and was part of a deal to build four private casinos that would be built to offer sports wagering. That finally came to fruition in 2019 when the first sportsbooks launched in the state.

Four upstate New York casinos currently have sports betting in the state, and betting in sports lounges is also authorized in full-service casinos operated by the Akwesasne Mohawk, Oneida, and Seneca nations. However, there are still no laws in place for mobile betting.

New York Senator Joseph Addabbo has been the leader in creating legislation for mobile betting. He believes the state can see $200 million in revenue if New York legalized it. The Senate has passed mobile betting bills created by Addabbo, but the bill stalled out in the Assembly.

The Assembly will reconvene on Monday, and still need to discuss mobile sports betting laws. However, this is a big step for a state that would benefit significantly from mobile betting. A bill passed by both the Senate and the Assembly could also lead to Cuomo signing a bill to allow it as well. If state lawmakers push a bill through for mobile betting, then this could pressure Cuomo into signing it.

The Big Deal on Mobile Betting

If New York legalizes mobile betting, then that will keep hundreds of millions of dollars within the state. Right now, New Yorkers find it easier to cross the Hudson River to place bets in New Jersey, rather than heading to upstate New York to place bets.

New York has also kept private casinos closed due to the coronavirus outbreak as Atlantic City reopened earlier this month.

In 2019, experts estimated that New Yorkers wagered over $800 million in New Jersey. New Jersey also sees close to 90 percent of the bets made via mobile devices within their state.

Addabbo himself believes New York could see $200 million in revenue once the market matures in the Empire State. New Jersey has a population of less than half the size of New York. However, New Jersey sees almost 10 times the amount of revenue from sports betting than New York does.

This goes to show how vital New York is to the state of New Jersey, and New York could keep the revenue within the state if they legalize mobile betting. New laws surrounding the idea will allow New Yorkers to bet within the city instead of crossing the border.

New York City is the largest city in the U.S. and could become a major sports betting hub. However, they will need to expand sports betting in the state for that to happen. Now might be the time for New York to capitalize on the situation.