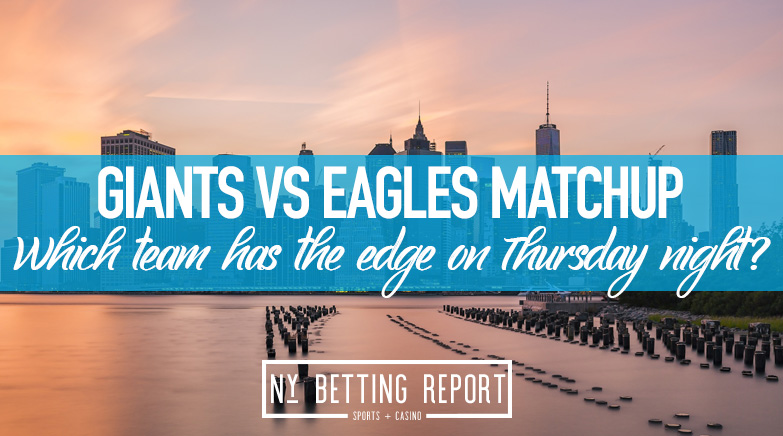 The Eagles are coming off a loss against the Ravens after coming from behind to almost send the game to overtime. The Giants won their first game of the season against the Washington Football Team this past Sunday. Now, the two square off in an NFC East showdown.

The public and money are coming in on the Eagles tonight, but given the talent level of both teams, something says the Giants will be able to keep this game close.

Looking at the numbers, the Thursday night matchup is not great. Having a combined two wins through six weeks of football is not ideal for a primetime matchup. Football Outsiders efficiency ratings actually have the Giants rated higher than the Eagles, but not by much.

What might make the difference in this game could be special teams where New York is ranked 6th and Philadelphia is 18th.

Overall, seeing the line sitting at Eagles -4.5 feels off as no one has a distinct edge over one another. The Giants are traveling, which has historically hurt the road team in the Thursday night matchup. However, New York and Philadelphia are 100 miles apart from each other. The plane ride can’t be more than 25 minutes, so travel doesn’t seem negative with these two teams.

Deshaun Jackson is back in an Eagles uniform on Thursday. Since week three, Jackson has been suffering from a hamstring injury, and the Eagles could use a weapon for Wentz to throw to. However, if he is the only Eagles weapon, then the Giants should neutralize Jackson.

The line originally opened up at Eagles -6 and is currently down to 4.5. Although the number is going in the right direction, this could be a good chance to tease the Giants. Breakdown the numbers, there is no true edge for the Eagles to be favorites in this game, despite public perception.

I’m going with the Steelers +8.5 in a game against the Tennessee Titans have an early edge as the one seed in the conference. However, the six above are the best choices for the Week 7 NFL slate. Remember, when you tease a game, you want the number to go through at least two key numbers (3,4,6,7,10,etc.) and never tease through 0.