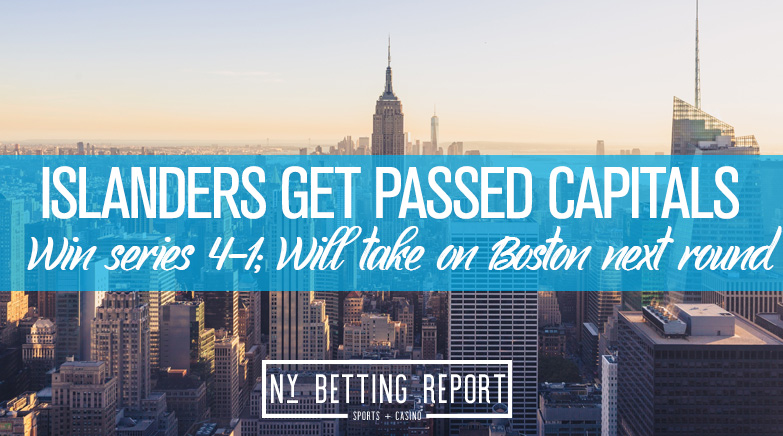 The New York Islanders knocked the Washington Capitals out of the playoffs last night, taking the series in five games. Head coach Barry Trotz knocked out his former team in the first round and has got the Islanders the second round of the playoffs for the second straight season.

New York was +140 to beat the Capitals in the series. After going up 3-0 against Washington, it was inevitable that they would be able to finish out and advance to the next round.

The oppennts will gett much thought for the Islanders moving forward, but it must feel good to get the first-round win. Winning will help continue to show free agents the Islanders are forreal and help the team out in the long term.

As of writing this, the Islanders are +1000 to win the Stanley Cup, according to FanDuel Sportsbook.

Since Barry Tritz took over as head coach of the Islanders back in 2018 after winning the Stanley Cup with the Capitals, Washington has not made it out of the first round of the playoffs, and the Islanders have advanced every season under Trotz.

This goes to show how important coaching was for the Isles in this series, along with straight-up wanting to win more than Washington did. The biggest part of their game five series clincher was how all four lines for New York stepped up.

“We had four lines that brought it. There weren’t any passengers,” Trotz told the media after the game.

The biggest issue for Washington was their lack of offense. In the eight games played in Toronto, only three players scored more than one goal, and six players total put on in the net for the Capitals.

The lack of offense on the Washington side showed, and it is why they lost six of their eight games since the restart. They scored more than three goals in just one game.

Overall, the Islanders were able to slow down the lethal Washington offense led by Alex Ovechkin. Now, New York will have to face the Boston Bruins, who had 100 points in the NHL regular season before the shutdown.

What’s Next for the Isles?

The Islanders will face their toughest opponent yet. The Bruins took care of business against the Carolina Hurricanes in the first round. After a five-game series with Carolina, both Boston and New York will have time off before the next round.

Boston was the best team in hockey before the league shut down due to coronavirus. After going 0-3 in the round-robin, Boston had no problem with the Hurricanes, and if New York is not careful, then the Bruins will cruise past the Islanders.

Fortunately, for the Isles, Bruins’ goaltender, Tuuka Rask, left the NHL bubble during the Hurricanes series. Rask’s reason was that he did not feel motivated to play in the bubble anymore and went home. Rask was 1-3 and allowed 11 goals in the bubble.

This could create an opportunity for the Islanders to take advantage. However, backup goaltender Jaroslav Halak has been very good for Boston since stepping up. Harlav is 3-1 thus far and looking just fine in his new role.

This will be the Islanders’ toughest opponent yet and will have to make sure they pay attention t details in the next series. If they are not careful, then Boston will handle them no problem.