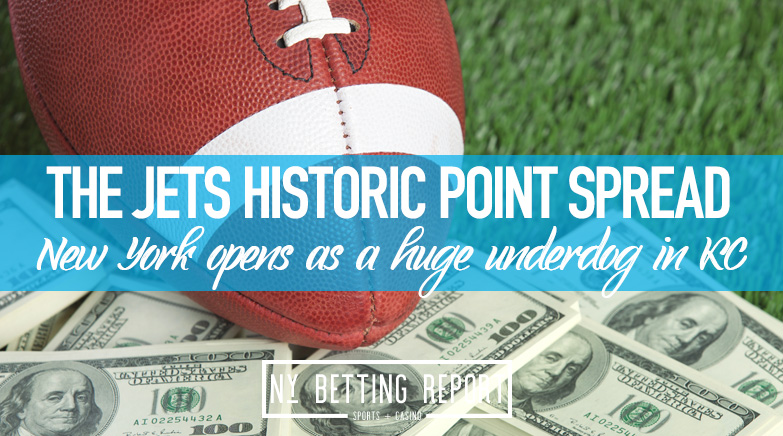 Early Sunday afternoon, Week 8 NFL lines started popping up on sportsbooks. It was a typical Sunday despite the Jets opening up as a historic 21.5-point underdog against the Kansas City Chiefs. The line was quickly beaten down to 19.5-points as of Monday.

The opening line makes sense and was going to be arguably the largest spread on an NFL game this season. The Jets are currently 0-7 and 1-6 ATS. New York is playing historically bad football and could statistically become the worst team in NFL history, behind the 0-16 ’08 Lions and ’17 Browns. Kansas City is 6-1 and 5-2 ATS while defending their Super Bowl title.

However, history might side with the Jets in this match up. Teams that have opened up as three-touchdown favorites or more have struggled to cover the spread despite the huge edge in talent. It’s hard to believe the Jets will pull off the upset of the century, but maybe they can keep within three scores.

Since 1976, there have eight times where a team has opened as a three-touchdown favorite. Only the 1976 Pittsburgh Steelers have covered a spread of 21-points or more. That season, they beat an expansion Tampa Bay Buccaneers team 42-0 and covering as 27-point favorites.

Since then, no one has covered a spread of 21-points or more.

The closest a team had ever pulled off an upset as a huge underdog was in 2007 when the Philadelphia Eagles lost to the New England Patriots by 31-28 as 24.5-point underdogs. The Eagles beat the Patriots 28-24 in the fourth quarter before the undefeated Patriots came from behind like they always did that season.

The last time we saw a point spread this large was in 2013 when the Denver Broncos were 26.5-point favorites against the Jacksonville Jaguars. Denver won 35-19, but Jacksonville had no issues covering. They were only down two-points halfway through the third quarter in that game as well.

How the Jets Cover the Spread

Kansas City beat the Broncos by 27 points on Sunday in Denver and now come home to play a much worse opponent. It seems easy, right? Well, not exactly.

Of course, the Chiefs could cover on Sunday, but they will need to keep the offense humming while slowing down the Jets offense. Kansas City has a top-5 offense and top-10 defense, according to Football Outsiders.

However, their rush defense remains one of the worst in the league allowing 4.9 yards per rush. Although the Jets don’t have the best rushing attack, they will need to commit to a run game to keep this close. Kansas City’s rush defense is their Achilles heel, and the only way to keep the game close.

Run the ball 50 times on Saturday, and hopefully, New York does enough offensively to keep the Jets in it. Running the ball effectively will kill the clock, keep the Chiefs defense on the field, and Mahomes off it.

Although the odds aren’t in the Jets’ favor, history is on their side. Only one time in NFL history has a team covered a three-touchdown spread. Run the football effectively, and New York can hang around Sunday.