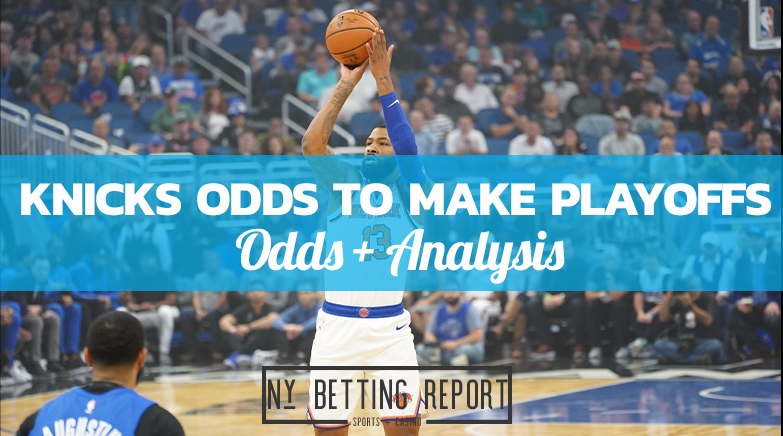 Odds have begun to circulate for teams to reach the playoffs and the Knicks were -250 to miss the playoffs despite being 7th in the Eastern Conference. New York is having a better than expected season, especially on the defensive side of the ball. Tom Thibedeau has this group playing tough, and the acquisition of Derrick Rose gets them some offense that they desperately need. As we approach the NBA All-Star break, the Eastern Conference is muddled from top-to-bottom outside of the 76ers and Nets. Could there be some value in betting on the Knicks to make the playoffs?

Knicks At The Halfway Point

New York is hovering around the .500 mark, but so is most of the Eastern Conference. Scoring continues to be the biggest problem as Julius Randle continues to be the only reliable scorer, averaging 23.2 points per game this season. RJ Barrett is averaging 16.6, but it comes at an inconsistent rate. Ranking 30th in scoring this season has been made up for by their defense. They are currently allowing 103.5 points per game this season, which is first in the league. They also rank third in defensive rating. Coach Thibs has certainly got these guys buying into his culture, which has been a missing piece in New York over recent years. Now the next few weeks could spell some trouble if the Knicks do ship a few players out to contending teams, but the rumors have been quiet.

Do The Knicks Have Betting Value?

Looking at the standings, we know the Heat and Magic have been playoff teams over the past few years, and the Heat are still favored to make the playoffs. But the Magic are not a good team, and then you have the Bulls, Hornets, Wizards, and Hawks all sitting below them, but only a few games separate all of them. But to put the East in perspective, the Knicks are only four games back of the Bucks for the three-seed and are a game behind Boston and Toronto. Looking into the quality of wins for the Knicks so far, they have five wins against teams over .500, and that is much or more than 76ers and Pacers. Nobody has been good against the West, but the Knicks have strung some wins together against them, going 5-7.

This group is certainly intriguing. They finish the first half against the Kings, Pacers, Spurs, and Pistons x2. There is a chance to build some more momentum heading into the break. New York has gone 17-14 against the spread this season, and if you are betting over/under, the Knicks are 21-10 for the under. This team is going to grind out games and be a tough out for anyone down the stretch. At the moment, nobody around the Knicks has looked good enough to say they are for sure in the playoffs. Betting money and odds still lie on the heat to get in, but that doesn’t mean the Knicks will be out. There is certainly some betting value for the Knicks here and making the playoffs.