NFL Players Opt-Out of 2020 Season due to Coronavirus 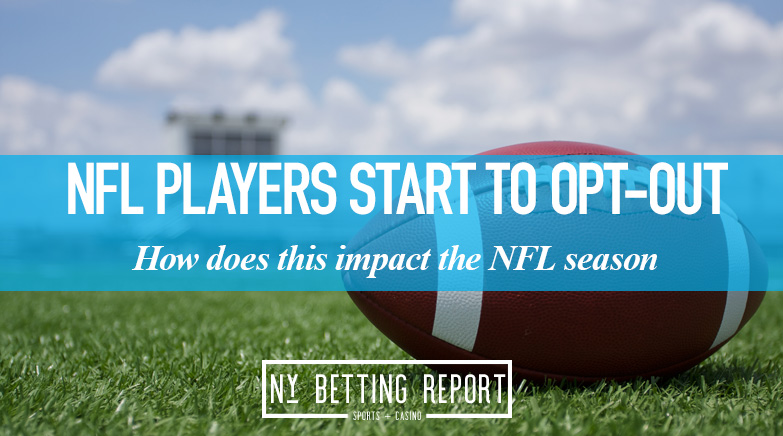 A domino effect is happening on Monday as multiple star players from across the league behind opting out of the 2020 NFL season. Players like Patriots linebacker Dont’a Hightower, Bears defensive tackle Eddie Goldman, and Seahawks guard Chance Warmack have all opted-out of the 2020 season.

This is just the beginning of what the 2020 NFL season could look like. Last week, the NFL and NFLPA approved a health and safety protocol guideline on the season due to coronavirus. Players were allowed to opt-out of the season with no penalties, and some are taking advantage.

Right now, the Patriots have seen the most players opt out already with six players doing so, as of writing this. This puts pressure on NFL organizations on how to handle the situation. Sportsbooks will also need to figure out a plan for their odds if more players continue to sit out in 2020.

The NFL season is on, but players opting out will impact the game. This is only the beginning of what should be an interesting training camp for players. If players continue to opt-out, then the overall competitive integrity could change the dynamic of the season.

If more players, including high-profile players, then this season could play out much differently than a normal coronavirus free season.

Overall, only one team seems to be impacted by the opt-outs, which is the Patriots. 10 teams have seen players sit out in 2020, and more will be sure to go on the list as training camp soon begins.

With multiple players sitting out on the Patriots, this does make it interesting for what Bill Belichick has up his sleeve. Every other team has less than two players sitting out this season, as of writing. The Patriots are up to six and counting. This also comes a month after they signed Cam Newton to a one-year deal.

NFL will have to wait and see what is in store for them in 2020. The league could look a little different come week one

How Does this Affect the Odds?

Depending on how many players per team opt-out, this could completely change win totals and futures for the NFL season. For example, the Patriots have seen six players opt-out of the season. They have lost Najee Toran, Dan Vitale, Marcus Cannon, Brandon Bolden, Dont’a Hightower, and Patrick Chung.

As of writing this, the Patriots are +115 to win the AFC East and +1700 to win the Super Bowl, according to FanDuel Sportsbook. With multiple players, including key defensive guys like Hightower and Chung opting out, this will change how New England finishes the season.

If bettors are looking for value, they can hop on teams that have multiple players opting out before the sharps jump on them.

There are also big issues once the season gets underway. What happens if a player tests positive for coronavirus the day before or morning before a game. There are serious implications if players test positive for the virus in the middle of the season outside of the obvious health risks.

A quarterback like Russell Wilson or Patrick Mahomes testing positive a few hours before a game will have massive swings on NFL sports betting. Similar to the MLB, positive coronavirus tests in the league will have a strong ripple effect on how the season plays out.