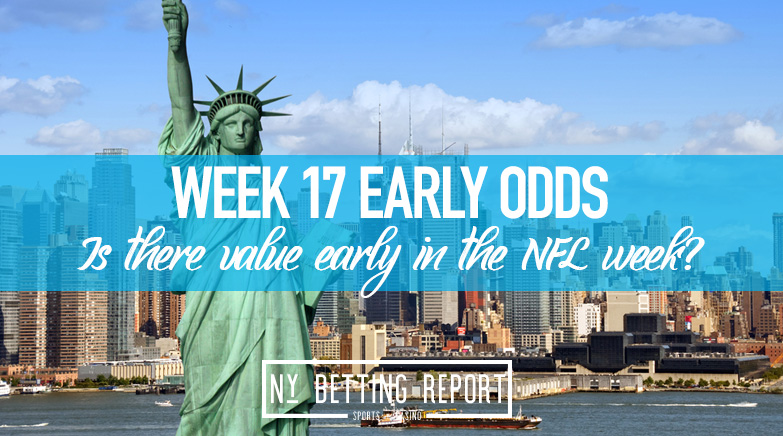 It is Week 17 of the NFL season, and is the final week before the NFL playoffs begin. The Buffalo Bills are the only New York team to have clinched a playoff spot, but the Giants have a chance to get into the postseason at 6-10 with a little help from the Philadelphia Eagles.

The Bills compete for the number two seed in the AFC, so a win on Sunday could keep the Dolphins out of the playoffs, and Buffalo is the two seed. The Giants are at home against the Cowboys, who hope to make it into the postseason.

Here are the best early bets for Week 17.

The Dallas Cowboys head to New York to take on the Giants this Sunday for one of the teams to keep their playoff hopes alive. The hopes could only last a few hours as the winner will also need Washington to lose on Sunday to get in. Washington sits a game ahead of the Giants and the Cowboys, but if Washington loses, they will be out of the playoffs. For now, New York and Dallas will need to focus on securing a win this Sunday in hopes of getting into the postseason.

The New York Jets head to New England to take on the Patriots. Although it is one of the few meaningless games this Sunday, there is some intrigue for this matchup. The Jets have won two in a row and could try to finish the season strong at 3-13 on the season. This is the first time since 2008 that the Patriots will not be in the playoffs, and Bill Belichick could tank the last game of the year to earn a higher draft pick in the upcoming draft. Normally a meaningless week 17 game for the Patriots means a clinched playoff spot, but this January, New England will be watching the games from their couch.

Miami is heading to Buffalo to take on the Bills this Sunday. The Dolphins need to secure a win to get into the playoffs. Although the Bills are already in, they will want to earn the two seed in the AFC and win on Sunday to do so. However, the Dolphins have an edge in rest as Miami played on Saturday, and the Bills played on Sunday. This could be a huge factor in this week’s matchup. Buffalo went down to Miami earlier this year and beat the Dolphins. Now, Miami will want to return the favor to get into the postseason.

The Dolphins went back to Ryan Fitzpatrick in Week 16 and helped secure a huge win over the Raiders on the road. Miami will need Fitzmagic one more time this season to get into the playoffs for just the third time since 2001. The rest Miami has leading up to Sunday’s game is huge and could be the deciding factor on Sunday.