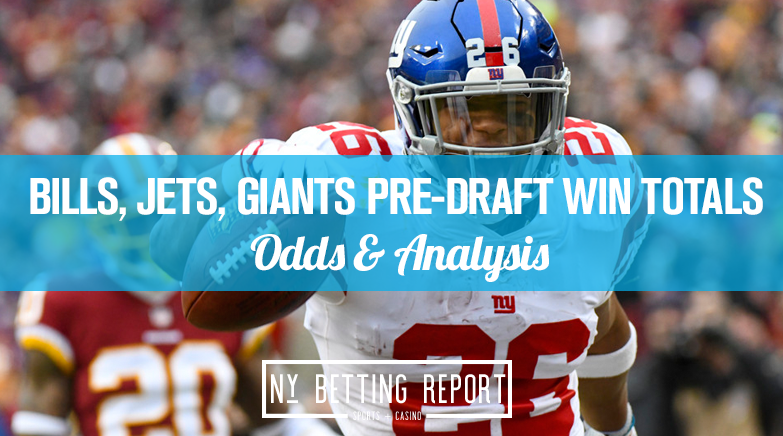 Win totals have begun to come out on multiple sportsbooks and will be changing over the course of the offseason and season. The Giants, Bills, and Jets are all up. Both the Giants and Jets will likely change a bit over the course of the offseason, mainly because their drafts could swing the total slightly. The Bills won’t be addressing a major need like the other two, so it should stay the same over the next few months.

Buffalo is -118 to finish over 10.5 wins and -104 to finish under. The AFC East will be tougher than it was last year. Adam Gase is gone in New York and the Patriots are welcoming back some defensive names and splashed in free agency. They should also be in the market for a quarterback. They will also face the Panthers, Falcons, Steelers, Chiefs, Buccaneers, and Saints. This will be a tougher year, but if Allen builds on last season and the defense can add a pass-rusher, they will be around this 10-11 win mark. It will be close, but I don’t believe we will see a dropoff after such a great year. This Bills roster is here to stay.

The Jets have a 6.5 win total as many are expecting a better season with a change at quarterback, heavy draft picks, and an overturn of the coaching staff. At the moment they are still the worst team in a tough AFC East, but the Jets are on a better path. They did add some weapons with Corey Davis. New York is still going to face a tough schedule, as they take on the NFC South. That means taking on the Saints, Falcons, Panthers, and Buccaneers. They also face the Colts and Broncos, who are tough teams. Adding that into a tougher AFC East, the Jets might be more competitive this season, but it might not transition into wins just yet. Seven is a bit aggressive and the under is -150.

In what was a sloppy NFC East last year, the Giants went 6-10, while the division winner had seven wins. New York went out and added to their secondary and the defense is a few pieces away from being strong options. The offense added Kenny Golladay and will return Saquon Barkley. There are weapons in this offense that will certainly make the offense better this year but the offensive line and Daniel Jones will need to step up. There are some winnable games but the division will be better with Washington having a competent quarterback and Dak Prescott from returning. The Giants are -110 for both over and under seven wins.