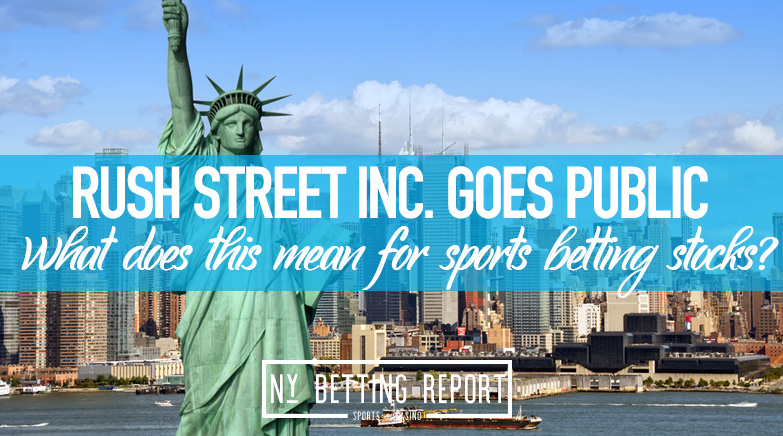 On Tuesday, Rush Street Interactive Inc. was able to ring the bell at the New York Stock Exchange after the company went public. Rush Street is based out of Chicago and started the company in 2012, making this a huge milestone.

Rush Street will trade under the “RSI” on the NYSE. A part of the opportunity to go public is because of the merger with dMY Technology Group completed in the final days of 2020. The merger was also able to help dMY also go public under the ticker symbol “DMYT.”

“This ceremony is a tribute to our incredible team, investors, and partners who all made this day possible,” said Greg Carlin, CEO of Rush Street Interactive. RSI will join DraftKings and Golden Nugget as publicly-traded gaming companies on the NYSE.

Rush Street Interactive has been growing its online gaming brand since the launch of the company in 2012. The Chicago based gaming operator runs sports betting operations in Colorado, Illinois, Indiana, Iowa, New Jersey, and Pennsylvania.

You can find Rush Street Interactive sports betting brand BetRivers in these states as the company will also look t expand into other states over the next few years.

RSI is also operating SugarHouse online casino in New Jersey. The online casino is operating under the Golden Nugget AC license, and Rush Street Interactive also has a physical casino thanks to a partnership with Monmouth Park. The casino originally launched in September 2016.

Rush Street Interactive is getting expanding at the right time, and now the company is going public, which will only help its business moving forward.

What Does this Mean for the Sports Betting Industry?

The sports betting industry continues to get companies to go public with the booming expansion. RSI joins DraftKings, Golden Nugget, and others as publicly-traded companies.

Despite the stock market taking a turn for the worst in early 2020, sports betting companies rebounded very well at the end of the year. Companies like DraftKings and Penn National, who now owns a share of Barstool Sports, have had incredible finishes to 2020 and should see more growth as two sports betting giants enter more states in 2021.

Now, Rush Street Interactive has the chance to join these companies in the sports betting boom. With RSI already having betting operations in six states, including an online casino in New Jersey, Rush Street should see a lot of growth in the coming years.

There are already index funds specific to sports betting, and Rush Street Interactive could join some of these funds with how the company has performed since 2012.

The Chicago based company has put them in a great position to move its business even further. By going public, it can now look to those publicly traded funds to grow into other states. RSI can stay on par with DraftKings, Penn National, and Flutter Entertainment as the market leader.