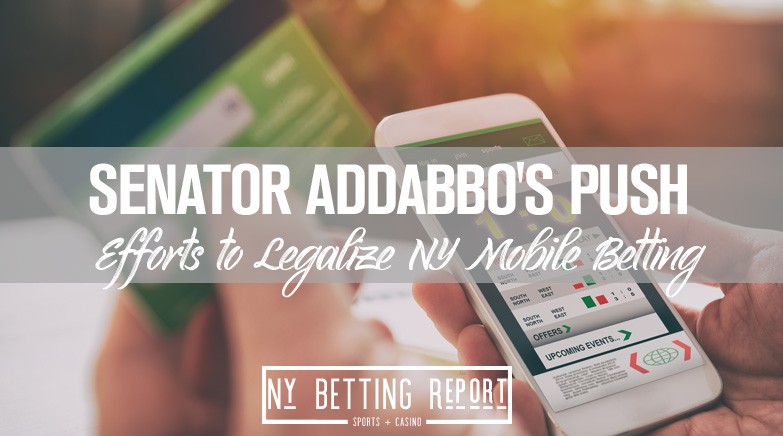 In 2018, the U.S. Supreme Court allowed states to handle legalized sports betting on a state by state basis. 14 months after sports betting became legal, New York opened their first sportsbooks in the state. Four sportsbooks have been open in the Empire State since July 2019.

The opening of sportsbooks is exciting news for New Yorkers as they have their sportsbooks to go to instead of heading to New Jersey to place bets. However, the locations of the sportsbooks aren’t ideal for people who live in New York City.

All four sportsbooks locations are in upstate New York with the closest sportsbooks being 90-miles from the Big Apple. So, anyone looking to make a bet that lives in New York City continues to drive over to New Jersey to do it. The locations leave millions of dollars in revenue on the table for New York.

One New York Senator realizes the issue the state has in lost revenue due to a lack of mobile betting. Senator Joesph Addabbo is leading the way for the Empire State to legalize online wagering. During the pandemic, New York is facing a massive budget crisis, and online sports betting could be one way to solve the issue.

Senate Bill S17D is the ticket to go mobile wagering legalized in the state of New York. Sponsored by Sen. Addabbo, the bill was proposed in January 2019 to allow mobile wagering to happen at the same time sports betting would begin in New York.

The co-sponsors of the bill are David Carlucci, Leroy Comrie, Rich Funke, and Patrick M. Gallivan. The rules created for the sports betting bill would be sportsbook operators would have to pay a $12 million licensing fee along with an 8.52 percent tax on revenue, and a 12.5 percent tax on gross revenue from mobile sports wagers.

Throughout 2019, the bill passed through the Show, Racing, and Gaming Commission along with the Rules Committee passing with flying colors every time. In June 2019, the Senate passed SB S17D on a 57-5 approval. The bill moved to the Assembly for review. In January of this year, the Assembly dismissed the proposal altogether.

What Needs to Done

The Assembly dismissed the bill, and Assembly Speaker Carl Heastie called for a study on the sports betting industry. The submission date was supposed to be June 1, 2020. However, the coronavirus pandemic pushed everything back, and Sen. Addabbo is looking for an extension on the study. Right now, the sports betting study is looking to finish up this year.

Assemblyman Gary Pretlow is also a proponent of mobile sports betting in New York. Pretlow and Addabbo are both working diligently to get the bill passed. Addabbo as successful in the Senate, but Pretlow needs to do some work on the Assembly. Both chambers of Congress have support for mobile sports betting. However, Heastie and Gov. Andrew Cuomo have blocked discussion from happening.

Addabbo and Pretlow need to keep working Heastie and Cuomo on passing the bill. Right now, New York is looking at a budget deficit in the billions due to COVID-19. According to Addabbo, New York could bring in $200 million in state revenue if mobile betting becomes legal.

New Jersey is becoming the “Las Vegas of the East” since sports betting became legal in 2018. In 2019, New Jersey saw $4.5 billion wagered within their state, and 84 percent of the bets coming from online devices. Also, studies have shown that in 2019 New Yorkers wagered $837 million in the state of New Jersey.

New York City has a population of nine million people, and sports bettors find it easier to drive across state lines to place bets instead of heading to upstate New York. The current laws are costing the state of New York millions in revenue with a lack of sportsbooks and mobile betting around America’s largest city.

Addabbo and Pretlow should lay the New Jersey sports wagering numbers in front of Heastie and Cuomo to help them understand how much money the state is leaving on the table. With a budget deficit in the billions on the horizon, New York needs to think of revenue streams quickly. Also, missing out on easy revenue streams would upset New Yorkers and state officials.

Mobile betting in New York is one of the easiest options to help keep money within the state. New Yorkers would rather place bets from their couches instead of driving into New Jersey.