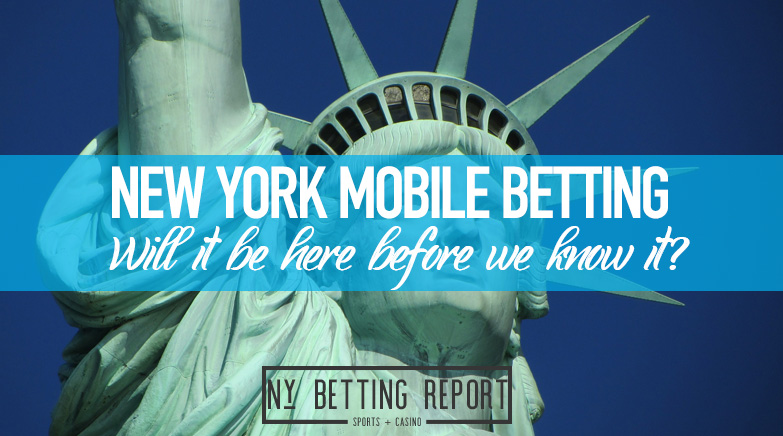 New York was one of the first states to legalize sports betting after the U.S. Supreme Court struck down PASPA in 2018. Actually, New York had the foresight to create four commercial casinos in upstate New York in 2013, so when the opportunity came for legal sports betting, the state could capitalize on the new industry right away.

And New York did.

In the summer of 2018, the first sportsbook in New York opened for business, and three more sportsbooks followed, along with tribal casinos launching their own sportsbooks as well. New York and neighboring state New Jersey were on pace with legal sports betting, except for one big thing.

The seemed like no big deal at the time, but it has now grown into an issue the Empire State is starting to face. New Jersey is benefitting from no mobile betting in New York while hitting record betting handles each month.

New York is lucky to get a few thousand dollars in taxes each month from the four upstate New York casinos the remain open at limited capacity due to COVID-19. Sen. Joseph Addabbo has been adamant about legalizing online sports betting. Still, state lawmakers and Gov Andrew Cuomo have not given though despite the state losing out on millions of dollars in taxes due to legalization.

New York has a much larger population on and is home to New York City, the largest state in the U.S. This gives New York a huge opportunity over New Jersey to become the premier sports betting state on the east coast, but that now belongs to New Jersey because of online betting.

Outside of no mobile betting available in the Empire State, New York’s closest commercial casino to New York City is 90 minutes away in Schenectady. No one in New York City will be willing to drive 90 minutes outside of the city when it’s easier to cross the Hudson River into New Jersey and place bets there.

According to a 2019 report, New Yorkers bet roughly $800 million in New Jersey that year instead of staying in the state. New York City people find it easier to head to New Jersey to place bets on a Sunday instead of upstate New York.

Until mobile betting is legal, New York will continue to see numbers like this lost every year.

How Will Mobile Betting Become Legal

Sen. Joseph Addabbo has been at the forefront of the legalized online betting fight. He has a few backers in the New York chambers, but still not a strong enough backing to push through a sports betting bill.

However, there is a chance that mobile betting could become legal if the state realizes how much they are losing in possible taxes every year as the money goes to New Jersey.

Gov. Cuomo has not considered legalized mobile betting but could change his mind when he sees how big of a budget deficit the state will face due to the coronavirus outbreak.