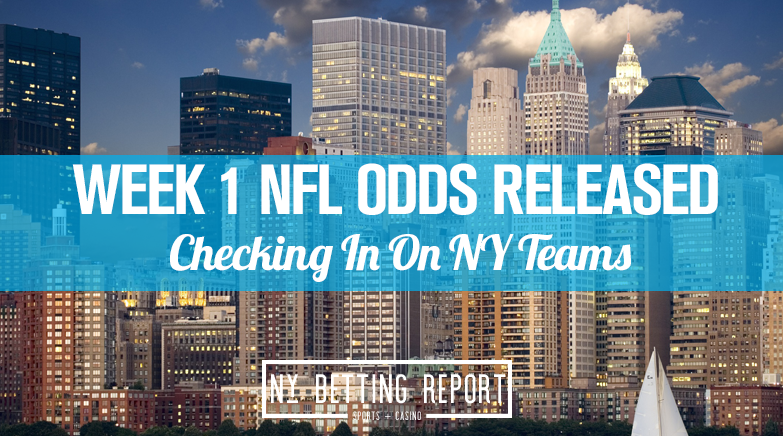 As the NFL schedule rolls out, Week 1 was released this morning which allowed sportsbooks to put out Week 1 lines. This will be the first year of the 18-week season, and also overseas games will be back in play. Week 1 sets up some interesting matchups with Dallas traveling to Tampa Bay to kick off the opener on Thursday. There will be no MNF doubleheader this year, but the Ravens will play in Vegas. As for the New York teams, two of the three teams are at home with some big games to start the year. Only one of the New York teams is favored based on early odds.

Sam Darnold will have a chance to stick it to his old team in Week 1 as the Jets travel to Carolina. This is an intriguing game where both quarterbacks will be taking snaps with a new team, and both teams have gotten better over the offseason. Carolina is the favorite here at -210, but the spread is more enticing. The Panthers defense has a chance to take a step forward, and there is enough here to make it tough on Zach Wilson early. The Jets defense is also going to have a tall order stopping this Panthers rushing attack and a group of wide receivers that run deep. That could be trouble for the Jets secondary that is inexperienced but still on the right path.

These two teams played back in 2020, where Buffalo won 26-15 and made it very tough on the Steelers offense. Pittsburgh struggled in the second half of last season with a mediocre offensive line, and they have struggled to improve in that department this offseason. They have also lost a few names defensively. Buffalo has largely stayed the same, and this will be our first chance at seeing if Josh Allen can keep the same pace as last season. The touchdown spread projects that there is a large difference between these two, and I am buying in. Buffalo should be pass-heavy yet again, as were the Steelers last season. Buffalo’s run defense will see Najee Harris, and they will need to improve based on last year’s numbers. It will be a wide receiver galore in this one as both sides offer up an excellent receiving core. The Bills secondary is in a better spot to slow them down.

Both teams added offensive weapons this offseason as Denver took Javonte Williams in the draft, while the Giants took Kadarius Toney and signed Kenny Golladay. Daniel Jones and this passing offense will see a revamped and healthy Denver pass defense that should be troublesome offenses this season. They were sluggish against the run at times, and Saquon Barkley is expected to be back and healthy. This game is one of the lower totals over Week 1, sitting at 42.5. The defense can certainly rise to the occasion but this says a bit more about the quarterback play that has struggled the last few seasons.