Week 3 NFL Bets; Where does the Value Lie on New York Teams 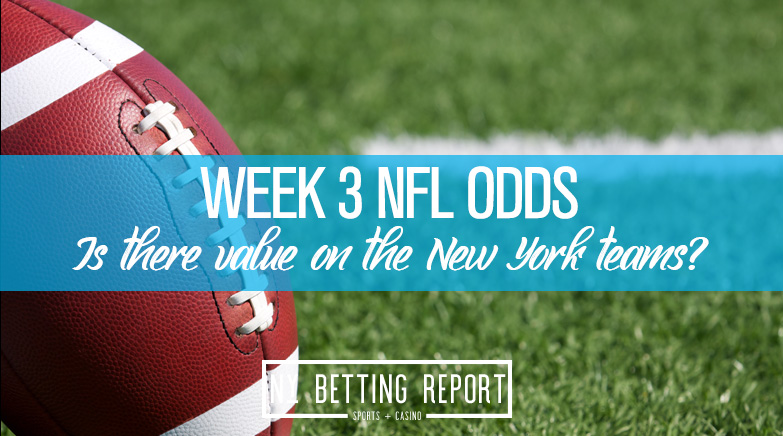 The NFL is three weeks into the season, and things are starting to shape up for teams in the Empire State. The Bills are the only New York team to have won a game thus far, coming int with a 2-0 record.

The Jets and Giants remain winless as both teams start the season 0-2. So far, things are right on par with expectations heading into 2020. The Bills are the best team in New York with the Giants and Jets lagging behind.

That does not mean there is no value when looking at the Week 3 NFL lines. Let’s breakdown each matchup and see if there is an edge heading into Sunday.

The Rams head out to Buffalo this week for a big matchup on Sunday. Both teams are 2-0 this season and impressing in their first two games. Buffalo has had an easier schedule so far this season starting out against the Jets and the Dolphins. Los Angeles has taken on the Cowboys and Eagles, but the matchups did play into their favor.

However, the Rams may not be as fortunate heading into Week 3. The Buffalo Bills have a much better offensive and defensive line than the Cowboys and Eagles do. A lot of the Rams’ success came from dominating the line of scrimmage, which the Bills will not tolerate.

If the Bills are able to control the trenches and dominate up front, then they will be able to hold off the Rams and win this Sunday.

The 49ers head back to New York this week to take on the Giants. San Francisco was in the Meadowlands last week when they faced the Jets. During that game, the 49ers suffered a ton of injuries, which will make the rest of the season more challenging.

Nick Bosa, Raheem Mostert, Solomon Thomas, and Jimmy Garoppolo are all out this Sunday. Dee Ford has not practiced this week, and George Kittle has been limited with a sprained MCL and knee bruise. On the Giants’ side, they lost Saquon Barkley for the rest of the season with an ACL injury.

Given the number of injuries in this matchup this week, the edge will go to New York with a lot of Niners stars sidelined for Week 3. Although the San Francisco roster is much better than New York’s there is no question that injuries will play a significant factor in this game.