Week 8 NFL: Is There Value Betting a Team from New York? 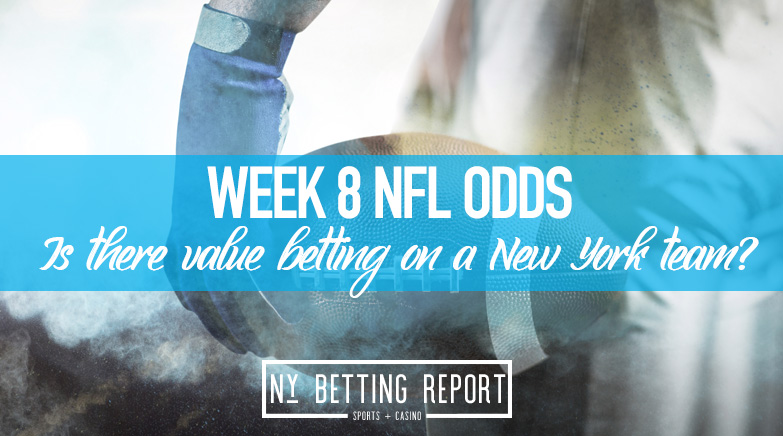 Week 8 of the NFL is here. New York football has been something to unfold whether it’s good football or not. The teams that play near New York City currently have a combined record of 1-13 this season. However, Buffalo has been a bright spot for New York football as the Bills sit at 5-2 this season and are first in the AFC East.

It looks like things are shaping for how the second half of the season will play out at the halfway point. The Bills will be looking to win a division title for the first time in over two decades while the Jets and Giants continue to be doormats for its opponents.

There is some value on some of the Week 8 lines in the Bills, Giants, and Jets.

The Jets open up as historic underdogs against the Kansas City Chiefs this Sunday. New York is historically bad, but they did show some life against Buffalo last Sunday, and maybe they are turning a corner in play despite being the worst team in the NFL. Kansas City did come off a statement win in Denver this past week, so it will be interesting to see how Kansas City performs against the Jets.

The New England Patriots head to Buffalo for an AFC East showdown. Buffalo struggled to take down the Jets on Sunday while the 49ers manhandled the Patriots at home. The public will be all over the Bills with the recency bias, but New England should make it a competitive game against Buffalo. The Patriots have dominated the AFC East for two decades, and although the Bills are in first place, New England won’t make it easy.

The Buccs travel to take on the Giants this Monday night. The matchup looks like a boring Monday night game, but the Giants have been known to play competitively this season. They have been pretty good against the spread and have hung around with the Rams, Eagles, and Bears this season. As a 10.5-point underdog, this could be a spot to back the G-Men on Monday night.

This is going to be gross, but we have to bet the Jets. However, history is on the Jets side as historically large favorites have struggled to cover the spread. Only two times in NFL history has a team covered a spread that opened up at 20-points or more. So, we bet the Jets because it’s gross, and the NFL is too talented of a league where even the worst teams are usually better than three-touchdown underdogs.

This should be a tough defensive battle between two teams fighting for first place in the AFC East. Obviously, the Patriots are 2-4 and two and a half games back of the Bills, but the Patriots have been the Gold Standard in the NFL for two decades. They won’t just hand Buffalo a win this Saturday, so both defenses should come out ready to play, keeping this game low scoring.