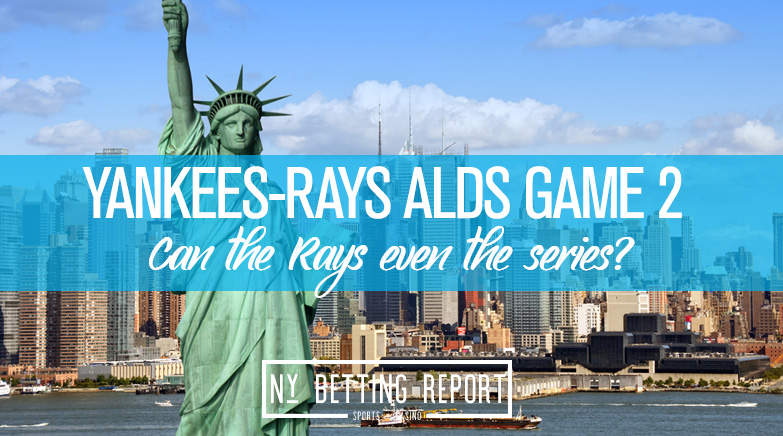 Game 2 of the ALDS between the New York Yankees and Tampa Bay Rays starts at 8:05 PM ET tonight. The Yankees took Game 1 by a score of 9-3 after putting up five runs in the top of the ninth to seal the deal.

Getting a win was huge for the Yankees in Game 1. They had Gerrit Cole on the mound and is one of the league’s best pitchers. New York needs to rely on its offense, moving forward as the rest of the pitching staff is not in the same vicinity as Cole’s talents.

The Rays pitching staff should have an edge in Game 2 as they start Tyler Glasnow compared to the Yankees Deivi Garcia. The Yankees could make quick work of the Rays if they can hit their way to a win in Game 2.

The Yankees bats will have their hands full yet again as they take on Tyler Glasnow. He went 5-1 in 11 starts and posted a 4.08 ERA and 2.75 xFIP. Against the Yankees, he went 1-1 in three starts and improving in each of their contests, allowing six runs total against the Bronx Bombers.

However, Glasnow’s splits against righties are not the best as he has allowed 12 more earned runs and five more home runs from the right side this season, on top of a .312 wOBA vs. righties. The Yankees will most likely have seven righties in the lineup tonight, which is a concern. Glasnow is also in the bottom 20 percentile in hard-hit % and exit velocity.

However, Glasnow did improve in each start vs. the Yankees this season with his final game against New York was a six-inning outing with nine strikeouts and no earned runs. Tampa Bay would like to see similar numbers again tonight.

The Rays will be going up against 21-year-old prospect Deivi Garcia. He made his major league debut this season and has started in six games for New York, posting a 3-2 record with 4.98 ERA and 4.63 xFIP.

Starting a 21-year-old rookie is a tall task, but it also shows how weak the Yankees rotation is beyond Cole. Garcia has allowed at least two earned runs in five of six starts this season, including three starts with four earned runs allowed or more.

Garcia has held his own against lefties holding them to a .226 batting average and .257 wOBA, but righties have been a different story as opponents .344 wOBA is well above average. His expected numbers on baseball savant are also well below average, including exit velocity and hard-hit %.

The Rays will have five, possibly six righties in the lineup tonight to take Game 2. They will need to get to Garcia quickly to use some of the Yankees bullpen up later in the week.

The Rays pitching matchup has a huge edge over the Yankees tonight. New York is averaging over 10 runs per game this postseason. As potent of a lineup the Yankees, have 10 runs per game in the playoffs is not sustainable, especially going up against the pitching they have seen. Now, I don’t think the Yankees bats will go cold, but they should come back down to Earth in this series. The Rays pitching and bullpen is too good to allow the Yankees to mash the way they have. Tampa Bay’s offense should be able to do enough tonight to even the series.