Yoenis Cespedes Opts-Out of MLB Season; How Does this Affect the Mets 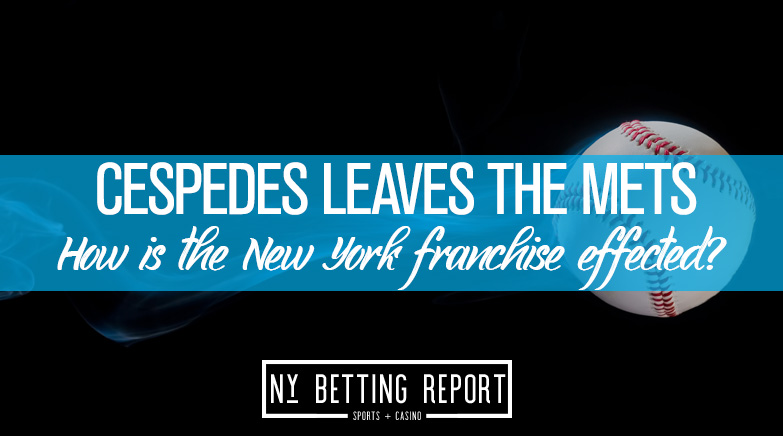 On Sunday, New York Mets outfielder Yoenis Cespedes did not report to Truist Park for their game against the Atlanta Braves. General Manager Brodie Van Wagenen talked about Cespedes’ decision with reporters after the Mets game. The decision was “COVID-related issues” according to the general manager, and the team did not know he would opt-out. The whole situation was weird.

“We support everybody and every player’s right to make this type of decision. This is a challenging time for everyone,” Van Wagenen said. “It was surprising, without question. At the same point, we have to go forward and not allow anything to keep us from going forward.”

Van Wagenen was informed by Cespedes’ agent during the game on Sunday. Cespedes was not in his hotel room when team security was sent there. His belongings were gone, according to reports.
Van Wagenen said he learned of Cespedes’ decision from his agent during Sunday’s game.

Through eight games, Cespedes was 5 for 31 with a .161 batting average. He struck out over 44 percent of his at-bats had a wRC+ of 77 and posted a -.2 WAR. Overall, the 2020 Mets will not be negatively impacted by the loss of Cespedes.

Cespedes was the Mets designated hitter for this season, and a batting average of .161 does not help for that position. The Mets will now most likely platoon the D.H. position between guys like J.D. Davis, Dominic Smith, and others.

Cespedes has been in decline since joining the Mets in 2016. That season, he posted a WAR of 3.7 and a 136 wRC+. Since that year, Cespedes has declined in ability and is now opting out of 2020. There is a chance that we have seen the last of Cespedes as a New York Met.

According to Roster Resource, the Mets will turn to Dominic Smith as their everyday D.H. He and J.D. Davis should be the two, as Davis was Sunday’s Mets D.H. after Cespedes went AWOL on the New York organization. Both players are posting wRC+ above 140, which is a considerable improvement from Cespedes’ 77.

Overall, the Mets should be fine without Cespedes. The situation made things more embarrassing for the organization, but this is what happens when the Mets are involved.

As of writing this, the Mets sit at 3-7 and in the last place of the N.L. East. New York is still +2000 to win the World Series, according to FanDuel. Overall, the loss of Cespedes might help this team offensively because of how poor his early-season performance was.

The Mets win total closed at 32.5 wins, which the under is looking good right now. The Mets have a lot of issues with their roster, especially a bullpen that cannot hold onto a lead. Even with the slow start, it does not feel like this team can rebound from the 3-7 beginning.

New York needs to fix their bullpen first and foremost if they want to have a chance at moving up the standings. The Mets are currently +310 to win the East, according to FanDuel.

The odds are against the Mets, and value is still not on the board to take a midseason stab at them. However, their offense could slightly improve with the removal of Cespedes from their lineup. If the pitching can turn things around, then maybe this team will start seeing wins.